My kind and compassionate guesthouse ‘nurse’ in Osh…and me looking a bit perkier than I was perhaps feeling!

9-26 (By the way…Now, an even later ‘now,’ we are all healthy happy and in Istanbul where I’m trying to take a nap and we just had a tremor…only good for a small room shaking. I’m starting the catch up blogging plan NOW…

9-23 KAZAKHSTAN: An earlier Now. However…Now is now…but here are some early morning musings from yesterday. It might be about 5am Tuesday morning the 24th. Surprisingly hard to keep track of at halfway around the world. All is well. We all feel great. Our airport stops and flights over yesterday were among the easiest and most efficient of any trip ever taken. Now in the Big City of Almaty. Teresa and Scott can go find all of the walks and hikes available around this mountainous upland. I’m strolling the streets looking for sweaters and sweatshirts that say Kazakhstan, dumplings and borscht, and if I feel super-brave, a shot of vodka for lunch. Walks down a few leafy streets and if time left the Big Art Museum, or that will be left for tomorrow, replaced by a nap. Good to remind myself I am not at heart an outdoor adventurer, but rather a little old Nordstrom-shopper lady.

On every beach, in every country in the world there’ll be a California girl. Lace in Osh.

9-22 Now (a several days-old now) back to Kyrgyzstan where it’s still yesterday or was yesterday?

KYRGYZSTAN: It’s the third morning of the second day or the fourth morning of the third day or something like that. At 11am we go to the local airport (where we’re told no one speaks a word of English—their privilege of course, just awkward when traveling—thank god I know how to say thank you in Russian) for the flight from Osh to Bishkek. We have a four hour layover and fly on to Almaty, a big sophisticated Russian city in Kazakhstan. What a relief; I am so done with the freshest of vegetables and ‘farm-to-table’ meat as the standard menu of the day. I want borscht.

It’s about 5am and the rooster who lives here at this cozy and leafy (even though mid-city) guesthouse has crowed. I have slept so much in the last two days that here I am, bright-eyed and bushy-tailed so to speak, wide-awake and feeling good. I think the suggestion of my bout of ill-health being a norovirus could be right; it was both violent and short lived. Although Teresa and Scott seem to have had the more typical travelers’ diarrhea version. I have been telling people for years to exchange the fresh vegetables in their diets for dumplings and bologna sandwiches…now perhaps they’ll listen.

I do have one small travel story I forgot to include in yesterday’s post. The morning after we arrived when I was seriously sick and semi-delirious Scott had the guesthouse lady call a local doctor who came over here, checked all the vitals, and prescribed Cipro and some supplements. He was kind and we communicated through Scott’s handy Russian-English translator device. After the trip to the pharmacy, the cost totaled $11.00. Eleven dollars. In the good old USA, we are talking office visit $50 (or emergency room $200 or so), meds $20-30 at least—costs to me; never mind what my insurance would pay and what my insurance costs me. For exactly the same services. Well actually I wouldn’t have been able to get into my doc for three days so it would have been the emergency room for a few hours (part of the time in a most unsanitized hospital bathroom throwing up and more). So. Could I have received high class (?) emergency surgery here? Probably, almost certainly, not. Do we usually need emergency surgery? No. Do we need the stupid-ass American system we have? Absolutely certainly not.

I’m obviously writing this because I’m bored and bereft of real travel stories. Adventures will commence again when we board one of the ‘most dangerous airlines in the world’ in Central Asia. Hopefully they have not been able to afford any Boeing 737 Maxes or we really will be in trouble. I brought along a kindle and three books. My son and granddaughter have confiscated the kindle and one of the books. I just finished The Remains of the Day and am down to Prairie Fires: the American Dreams of Laura Ingalls Wilder. The latter picked up spur of the moment at LAX, and an engrossing and beautifully written history of pioneer America it is—just not the perfect book for traveling through strange lands in sickness and in health. Remains of the Day on the other hand was just right. It is small and so very brilliantly tiresome, a book to easily put down and pick up for twelve minutes before falling asleep.

I am retaking the kindle tonight…but I won’t really need to because I’ll be in a regular hotel room—likely with little personality but WITH a bedside lamp and of course that greatest of luxuries, an en suite bathroom. We’ve had fairly easy-to-reach bathrooms most stays except for in the mountains and the sites have more than made up for the short walk down the hall; I really believe I miss my bedside lamp more than anything.

This is what travel is all about…having small (for the more daring-big) adventures, new sights (even moments of awe), experiencing new tastes (including deadly fresh vegetables) and remembering there are things back home that are worthy of your appreciation.

It is still too early to … The rooster keeps crowing. I cannot read about the Indian-settler wars in Minnesota another minute. If I eat one more banana I’ll go out in the guesthouse’s quite lovely courtyard and climb trees. Teresa and Scott are still asleep in the next room; this room was the sickroom for a day and a half, then it moved down the hall.

Just a footnote (especially for you Celia). There were only a few hours (while I doubted I would live—wimp me!) when the thought of never leaving my apartment again crossed my mind

Otherwise I’m on for Africa next year…with a supply of Cipro on hand. And a plan to live on mush and fried plantains (and Cheetos wherever I can find them). 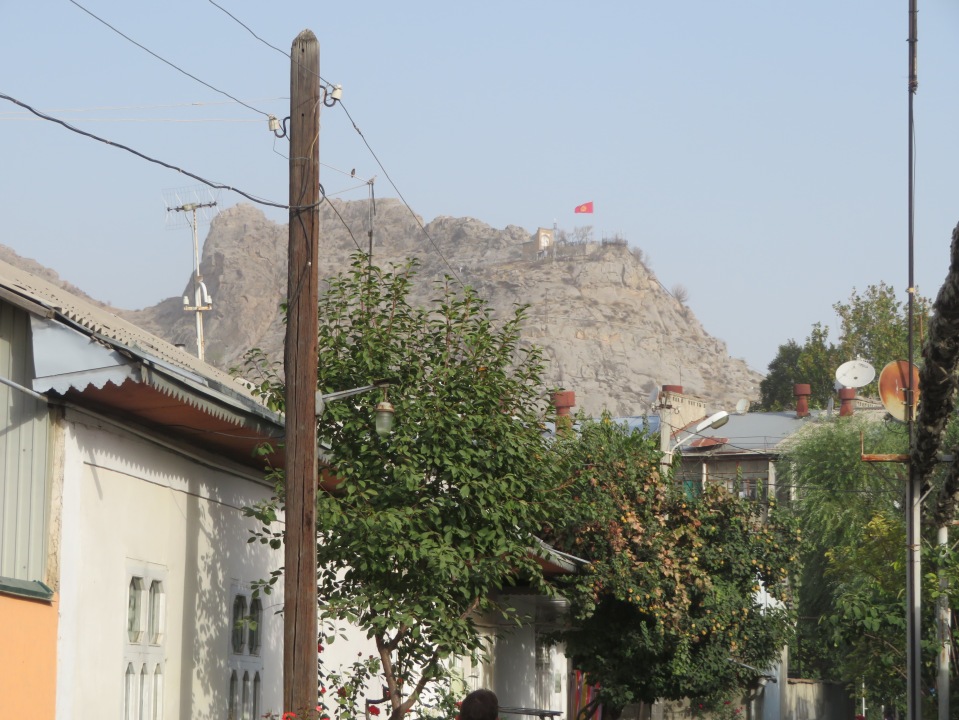 Over the mountains to Almatay, Kazakhstan.