Twenty or thirty years from now, when I’m napping in the nursing home or puttering in the poorhouse (depending on where the Republicans have taken us by then), I want my family and friends to remember that I once did something besides sit in front of the TV shouting obscenities at piggy politicians of the fascist persuasion and drooling into my cream of wheat.

I want to prove I once rode elephants and trains in far places; ate worms and crickets at fine restaurants; slept in forts and castles; and watched the sun set over the Ganges and the moon rise over Transylvania. To do so I’ve made my Time and Place travel blog into books.

There is a publishing business called blog2print that turns blogs into hard-cover, glossy-paged almost-coffee-table books. My previous years of travel blogging are already a set of these attractive volumes. The better to reminisce of times and places past…and impress my heirs (whose inheritance consists only of books since I spent all of my money traveling). 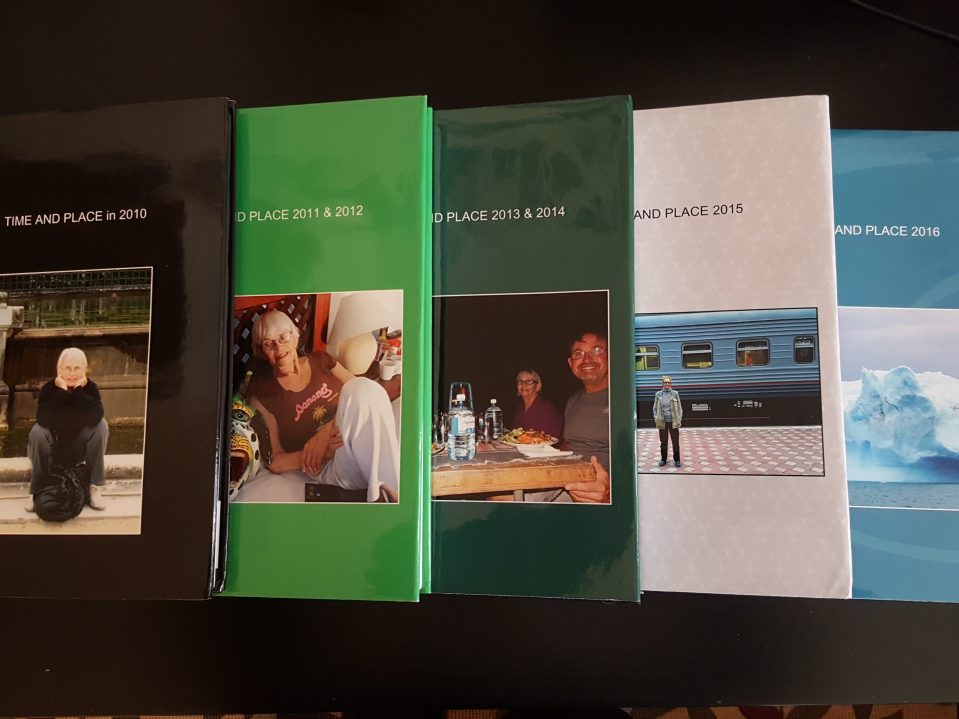 Now I’m preparing to close down Time and Place 2017 with a couple of final posts, first with a few more words and a photo from each of the six countries visited on this fall’s trip and, secondly, with the pictures to prove I’m back home in New Mexico. The blog will then be downloaded to the publisher and in a few weeks…voila…a real book—by me—will appear in my mailbox. My travel memoir may or may not ever happen—but I’ll always have my graduate thesis (a serious hard-bound and fairly readable book—really!) and these Time and Place blog-books to prove I am an author and that I’ve been around more than just the block!

Yes, I’ve been through that neighborhood—it’s a most fascinating place—you should definitely check it out. What is still to say about my autumn journey to Southeast Asia and India? How about one more observation about neighborhoods? I’ve made four trips that qualify under the ‘getting to know the neighborhood’ label: Southern Africa; Eastern Europe; Western Europe to Far Eastern Asia; and now Southeast Asia, including India. Obviously I’ve traveled to many of my 107 countries on other shorter or even longer journeys, but these are the four that comprise visiting consecutive countries within one broad region of exploration. The attraction of such journeys is that it’s possible to marvel over a big swath of geography; consider connections between major historical and political achievements…and wounds; and to investigate cultural/ethnic/racial connections across borders.

During my earlier, mostly European travels, I spent much of my ‘observation’ time on trains and in sidewalk cafes trying to guess whether people were from Greece or Sweden, or Italy or the UK, or which points in between—ogling and eavesdropping my way across Europe. This fall I was doing it in Asia where it’s an equally enjoyable pastime, although more difficult because the languages are generally unfamiliar. I am always curious about and captivated with how and why people are so different, yet with great similarities in appearance, manner, and speech, across the world’s geographies. How better to observe that phenomenon than by traveling through these sprawling neighborhoods?

New Zealand/Vietnam and Laos: The 2017 trip from New Zealand to Vietnam to Laos to Myanmar to Nepal to India was a study of all of the above. From the clean cool socialism-light of European-settled New Zealand, it’s a long flight and big leap in every way to the bustling beauty of Vietnam, the little Asian Communist country that could. Then on to the historic uplands town of Luang Prabang in Laos where all was green and quiet on the banks of the Mekong. 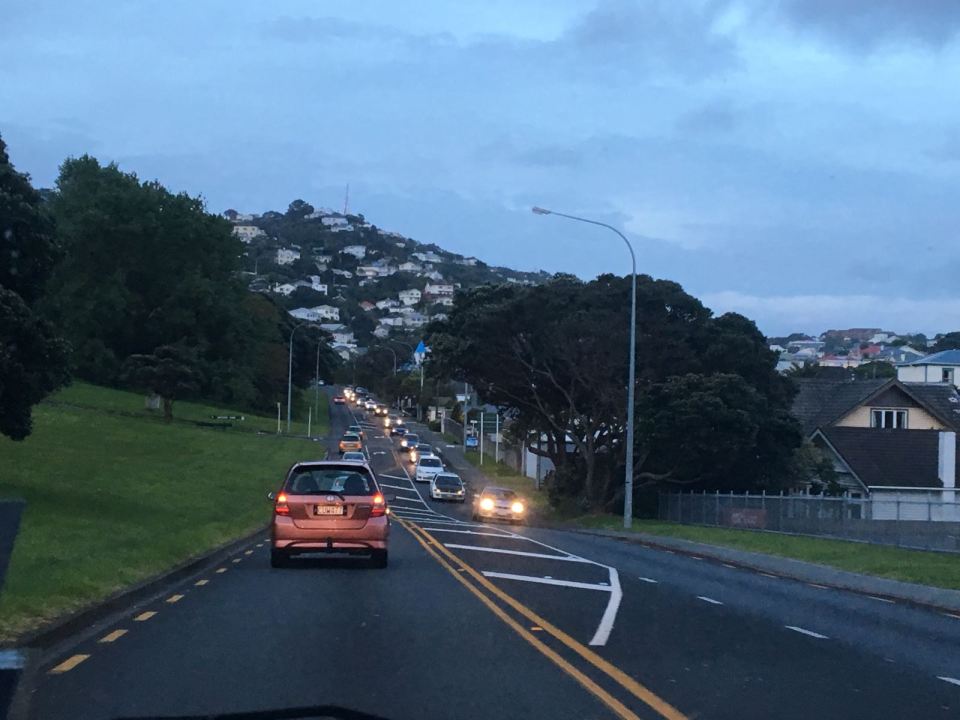 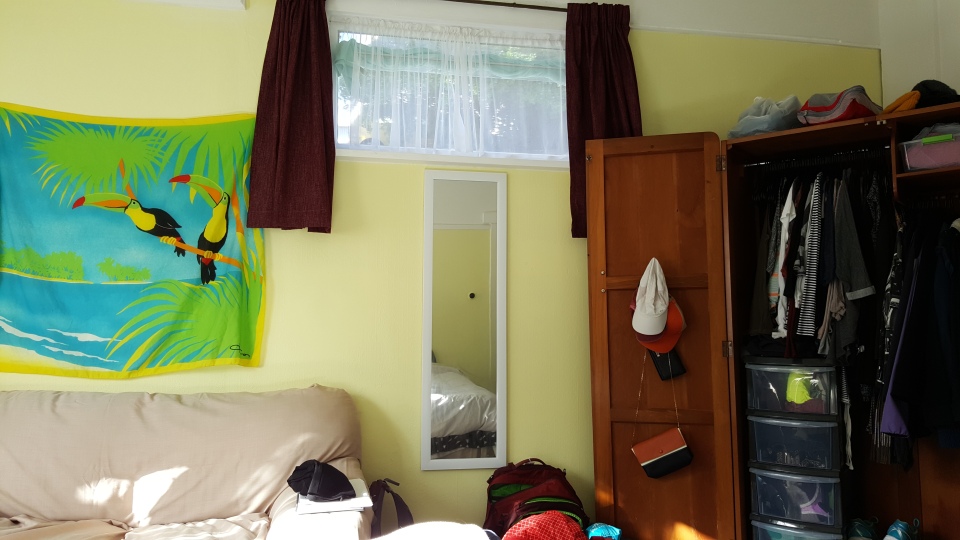 New Zealand was the outlier on this trip. In a way part of Asia, yet so set apart by its geographical isolation and European settlement. It is an almost too-good kind of land in its wild beauty, environmental and social practicality, and safe and respectful everydayness. I started in Wellington, New Zealand because my travel buddy granddaughter was living there. It was a chance to revisit a place where I had previously barely touched down, and to participate just a little in Teresa’s ‘foreign’ life. But Asian Asia was intended as the heart of the journey.

The first thing to notice anywhere is appearance—of people and mood and place. The Vietnamese and Laotians have a similar Southeast Asian almost-delicate and lively kind of good looks even though their ethnic origins are from different areas—the majority of Vietnamese are from what is presently northern Vietnam while most of Laotians originated nearby in southern China. Buddhism is the predominant religion in both countries and—I probably made this up but to me it’s true—it softens the societal/cultural edges of everyday human interactions. Both countries are communist but have allowed a lot of individual and private enterprise into the economy and have stable, relatively progressive governments. It seems to be working quite well—they are vibrant, busy, booming—and not nearly as violent as the US (just had to point that out). 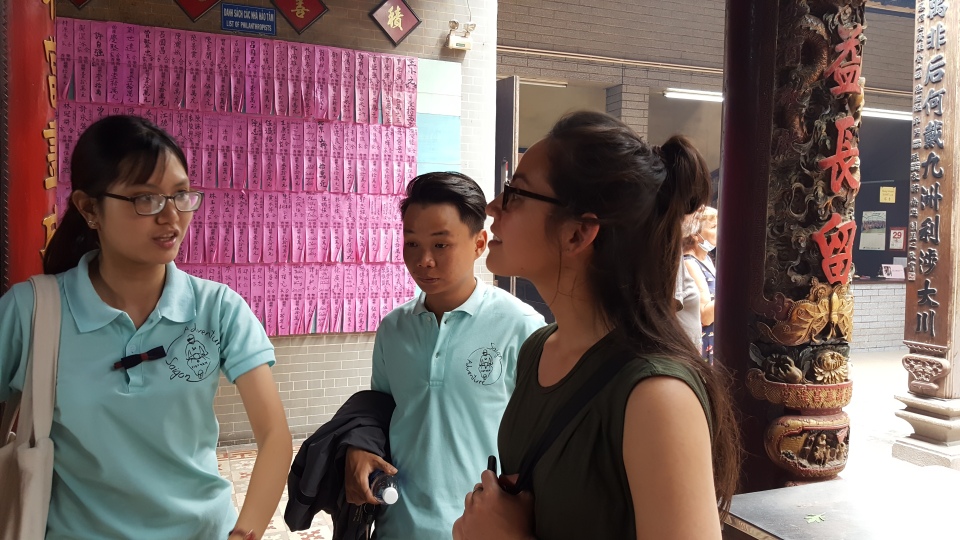 OUR GUIDES IN HCMC 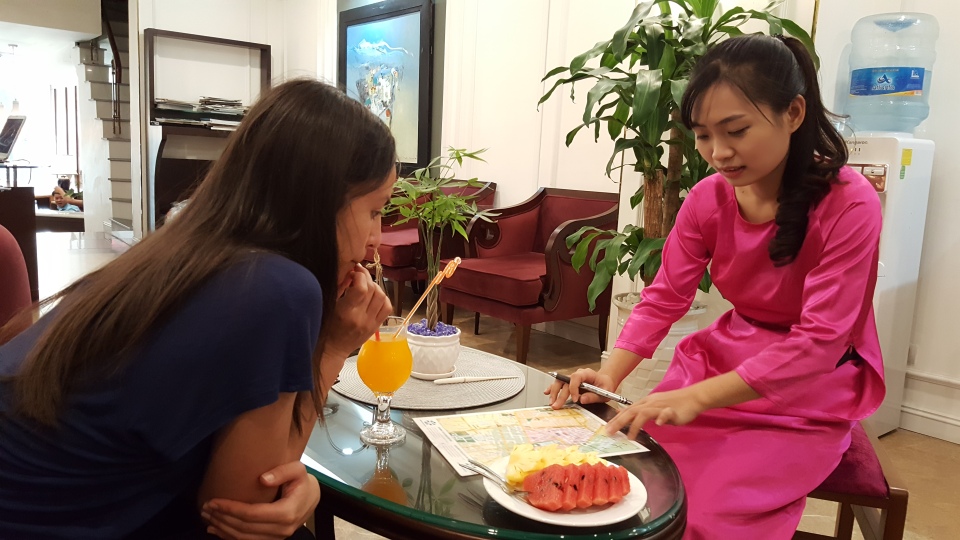 MAPPING THE HOOD IN HANOI 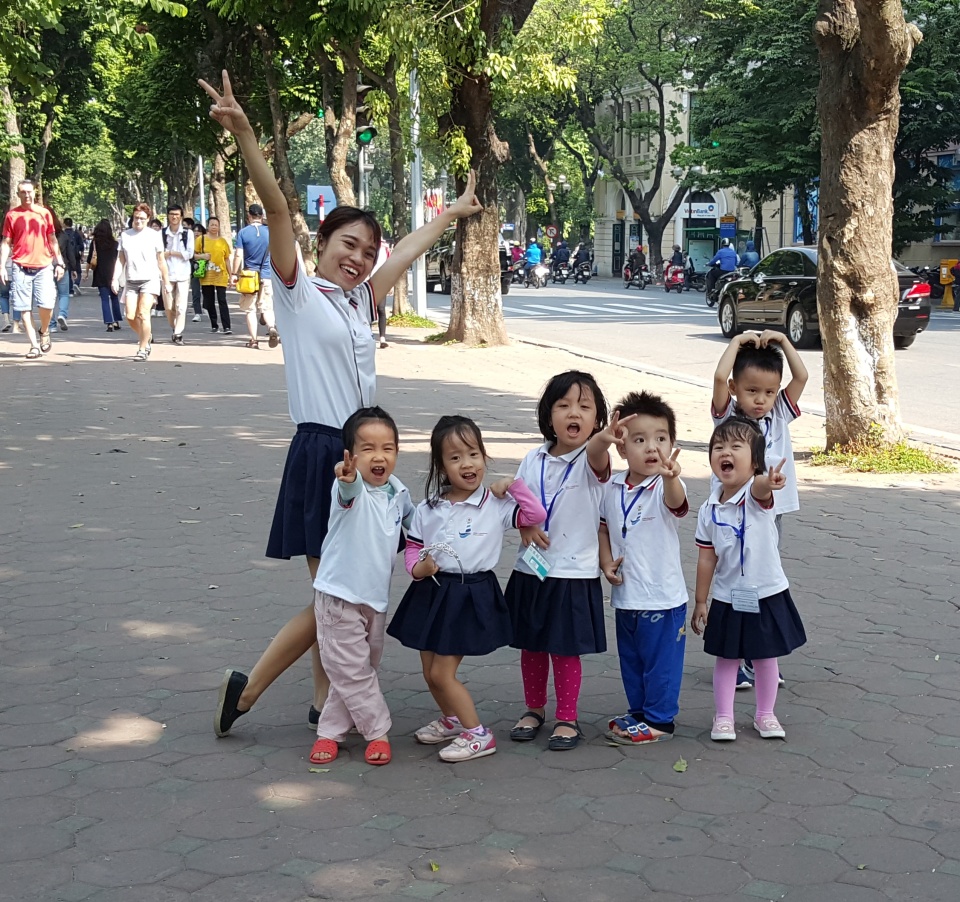 Vietnam is geographically, culturally, and culinarily gorgeous everywhere you look and eat. It felt so upbeat, a going-places kind of place, welcoming but not needy. I’ll stop there rather than use up my entire store of complimentary adjectives on Vietnam. I think Laos could match it in many respects, but sadly I wasn’t there long enough for much of that picture to emerge. 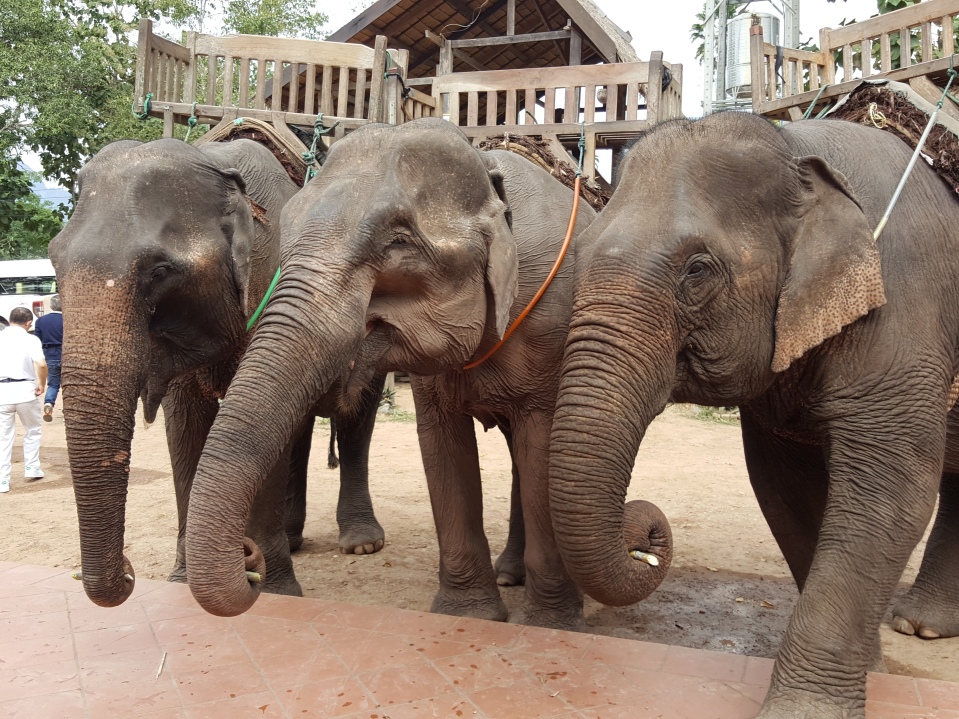 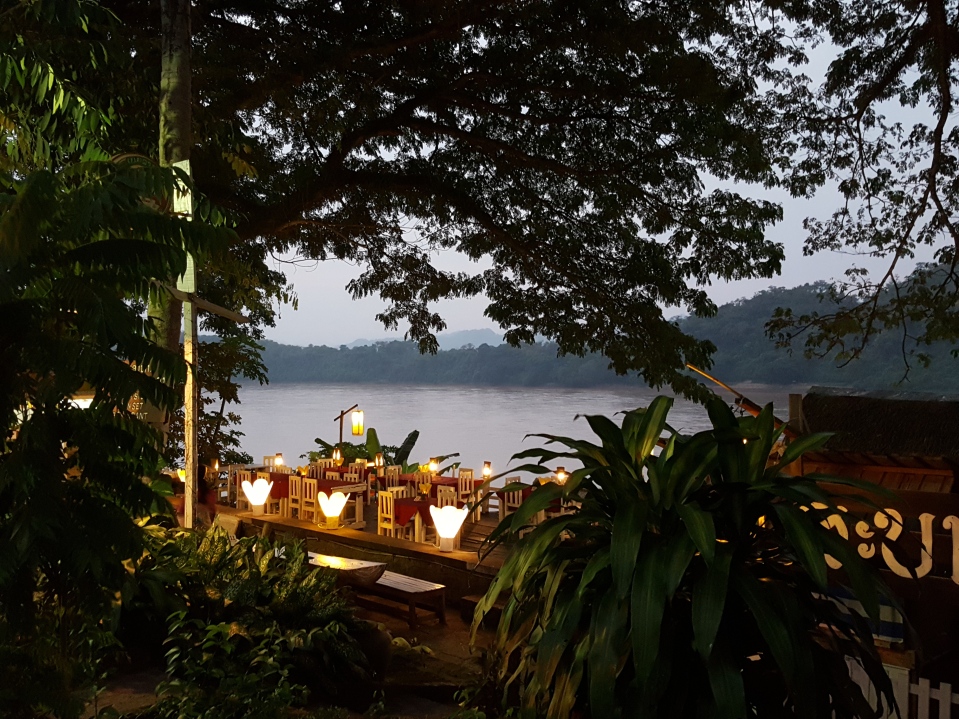 Myanmar: Another scenic delight. Ninety percent Buddhist so, like Laos, the monks in their orange robes are everywhere. I liked this place a lot; from the bustle of Yangon to the peace and mystical aura of Bagan. I know there are serious issues regarding Myanmar’s treatment of the Rohingya people but for my few days there I simply did what I do in new environments—looked and listened and treasured my hours of discovery. 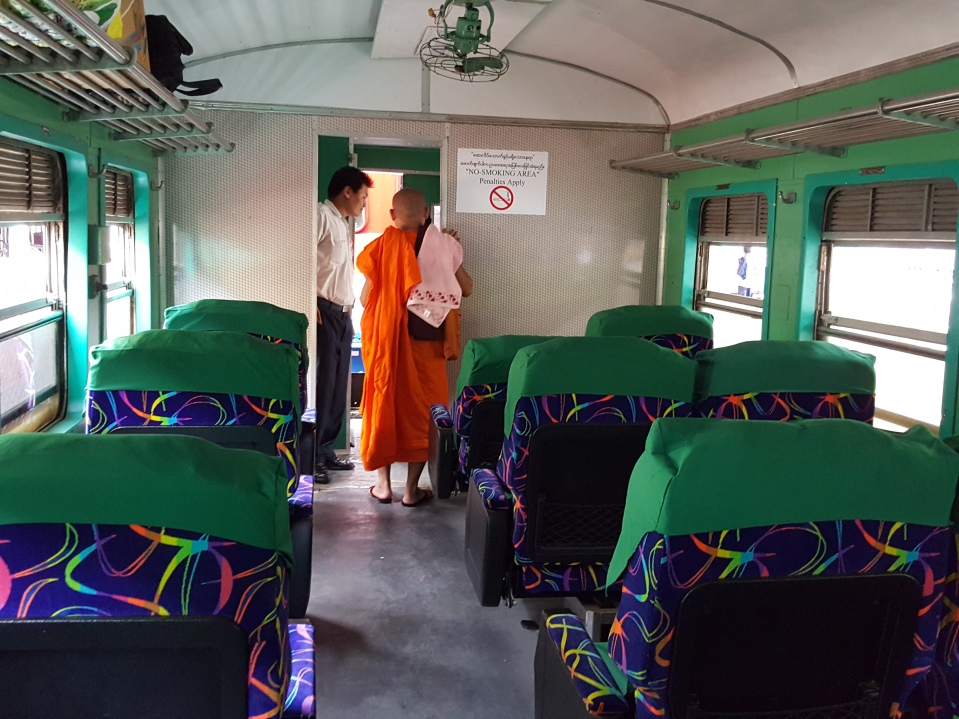 TURNS OUT THE MYANMAR TRAIN TRIP WAS MY FAVORITE.

`About two-thirds of the population is from the Bamar ethnic group whose ancestors originated near Myanmar’s Irrawaddy River as Sino-Tibetan speaking tribes. The Burmese people look different than the Vietnamese and Laotians. It’s the degree of variation between the French and the Italians—not such a big difference but enough to notice. Elegant seems like an apt comment on their appearance. It’s hard to define how one block in a neighborhood feels and looks and sounds and smells differently than the one next over, and yet it’s always true.

Nepal: Nepal was particularly fascinating to me because of Mount Everest’s magnificent presence and the many stories about and from its climbers. There are also wild backpacker tales from the back alleys of Kathmandu (a name that tickles one’s imagination all on its own).

The people of Nepal are another ancestral divergence from the neighbors. They share the DNA of both the Mongols from Tibet and the Aryans of India which their appearance reflects. According to one on-line source the Mongolian tribes arrived first but it was the Indians who would have the major religious impact with the installation of Hinduism.

I liked Kathmandu…but this is the backpackers (i.e. tourist part of town). 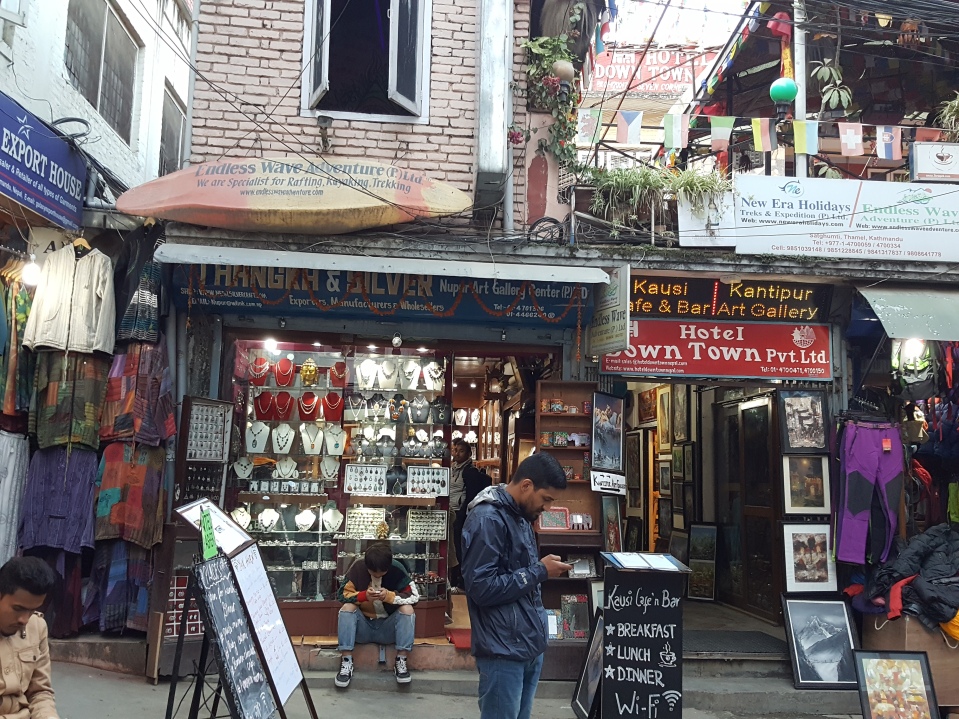 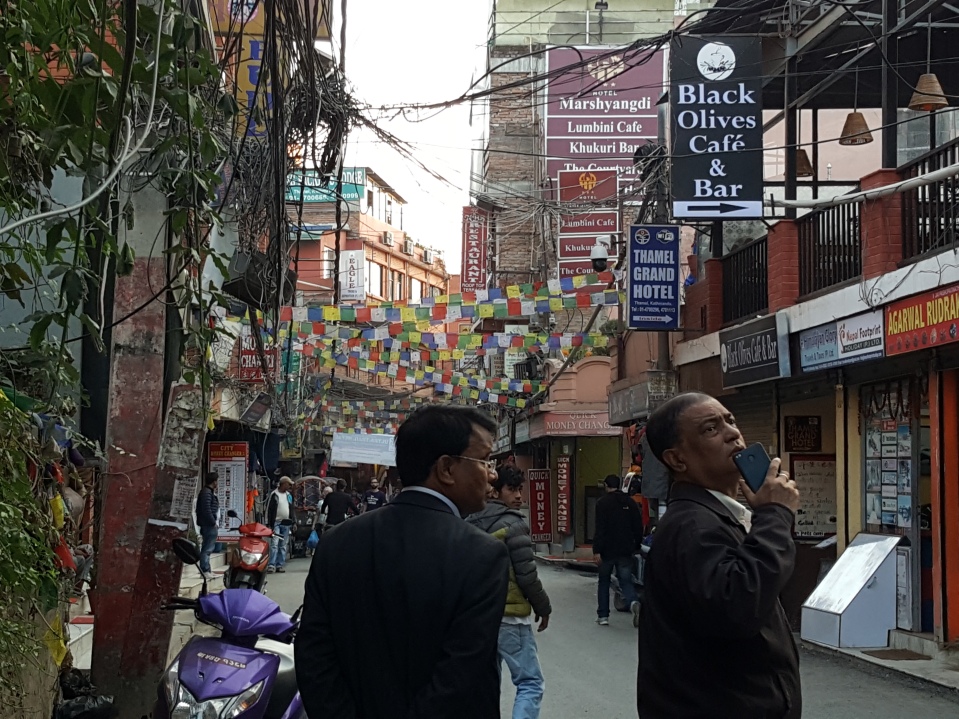 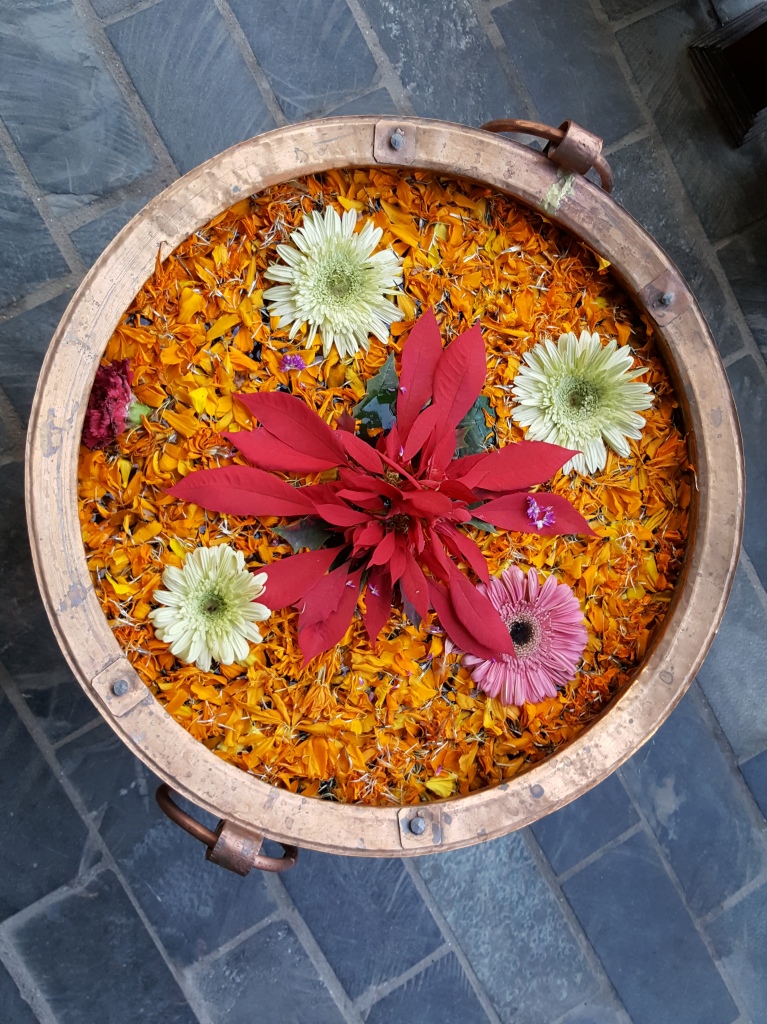 Actually Kathmandu reminded me more of Mongolia’s Ulan Bator than any of the Indian cities I visited. I am trying to understand the basis for that impression. Perhaps the Mongolian influence produces a little more reserve while—to me—India is a maximally visceral environment every moment of the day and night. It felt like the people in Kathmandu were less demonstrative, less noisy. Of course my vast knowledge of these things comes from a grand total of two weeks between the two countries so it is probably a good idea to completely ignore my impressions.

India: I’m not even going to try to make many observations about India because it defies any attempt at casual description. Suffice it to say that two of the most memorable times of my traveling life took place in Varanasi on the banks of the Ganges River and in Jaisalmer, high in a golden fort overlooking the desert. At the same time I was emotionally and physically exhausted by the extremes of poverty, the often hard-edged exchanges between people, and the dangerous levels of pollution encountered in many places. 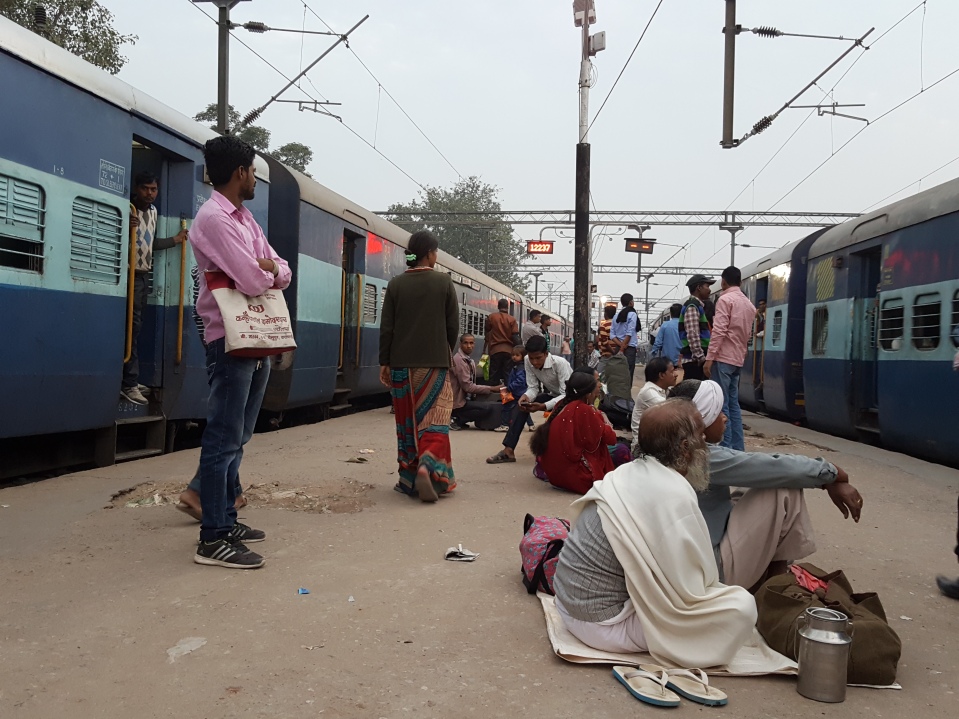 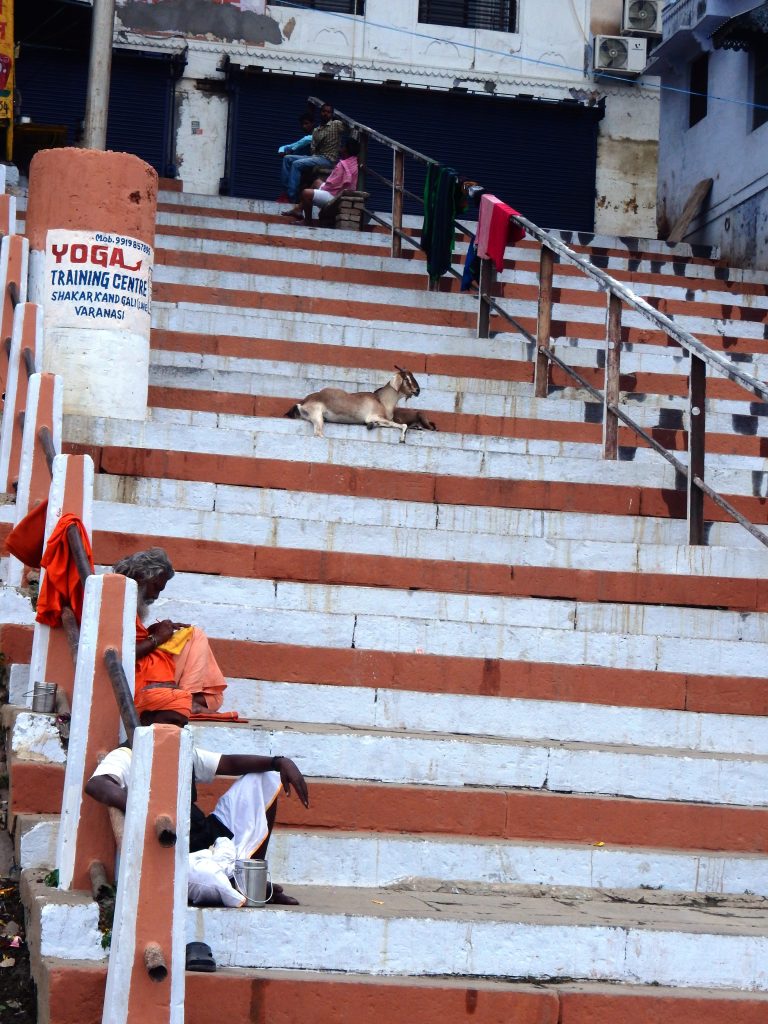 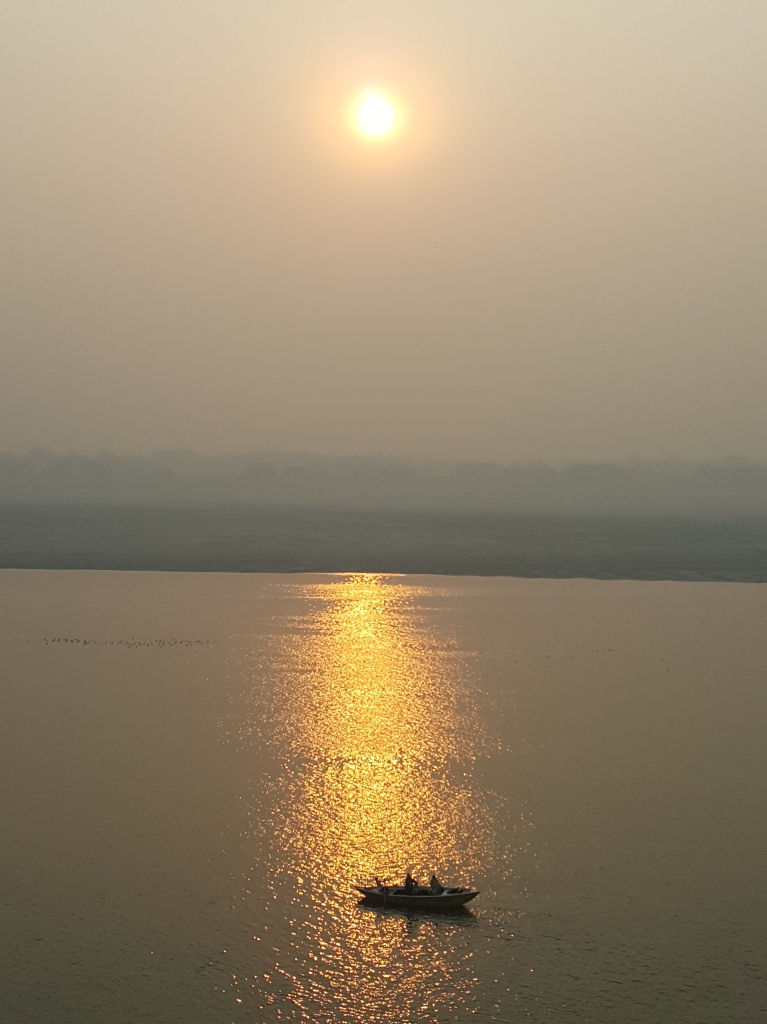 Indians are a dramatically beautiful people overall. According to one website, they share almost equally in a lineage that reaches from the Middle East, Central Asia, and Europe to the other half of their DNA from groups indigenous to the subcontinent. They are obviously an intelligent ambitious bunch; sometimes it seems Indians run or populate a big percentage of the physician practices, hotels, restaurants and tech ventures in the world. As I left Delhi in a cloud of poisonous air (and that is not an exaggeration) I thought, with some relief, well now I’ve been to India, experienced a bit of the good and the bad, and I’m okay that there’s no time left in my life to return. That was a little over a month ago and as I’m writing this, I’m thinking with some longing of what an adventure it would be to visit each and every Indian region—and how I do not like thinking I’ll never return to Jaisalmer. India is indeed a travel conundrum.

Neighborhoods: Vietnam and India are distinctly different countries in the south of Asia. To carry on with my ‘neighborhood’ simile I could say ‘distinctly different streets at opposite ends of an enormous neighborhood called Southeast Asia/India.’ Starting in Vietnam and ending in India took me across connecting cultures as one politically-defined entity/state faded into the next. It would have been more appropriate in a way had I begun in China and ended in India because the influence of the two regional giants is strongly felt in each of their ‘blocks’—China in Vietnam, Laos and Myanmar (although India here too); India in Nepal.

To my friends who say ‘But wouldn’t you rather experience one place in depth than merely take a surface overview of such a broad swath of territory?’ The answer is no. I’m a traveler, not a scholar. I like skimming along. 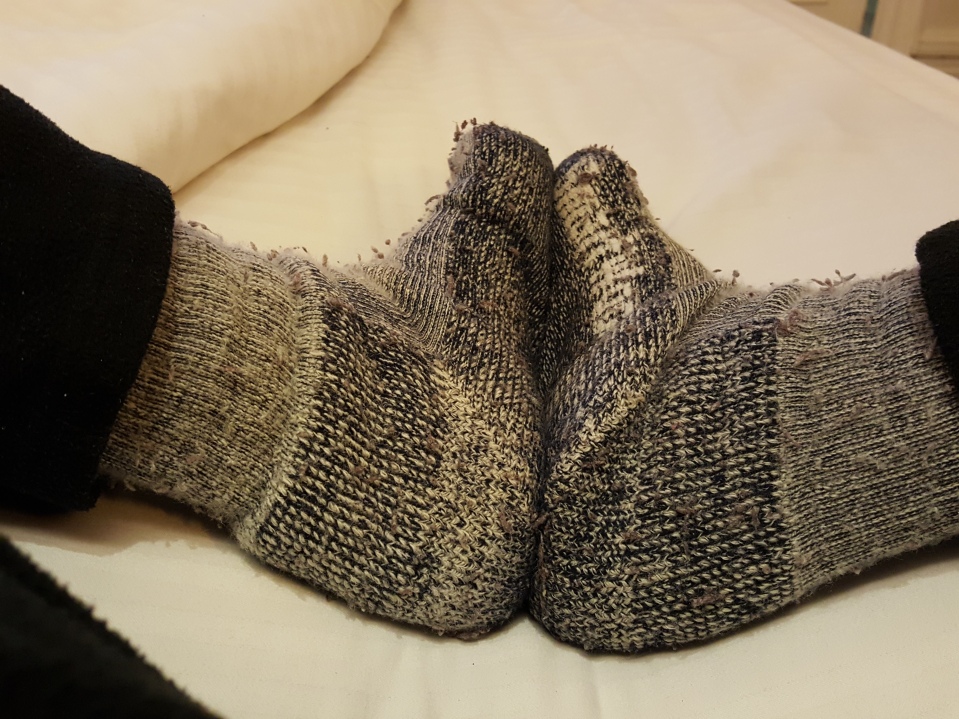 BUT WHEREVER YOU GO…ALWAYS TAKE YOUR WOOL SOCKS.