Lace says we shouldn’t make comparisons between countries/places—as in better or worse. I believe it’s okay to have favorites however (unless it’s children, grandchildren or the family dogs). Tajikistan is my favorite country for this 2019 trip and will remain among my favorites of all-the-countries-in-the-world. Tajikistan is basically a whole lot of mountain ranges squished into a small country with a modest strip of the Fergana Valley (the breadbasket and ethnic trouble spot of Central Asia) for a brief change of scene. Tajikistan is actually a little different than any place I’ve ever been (of my now-visited 116 countries!); it is gloriously grandly high—one of the places justifiably labeled “Roof of the World”—and proudly culturally traditional. 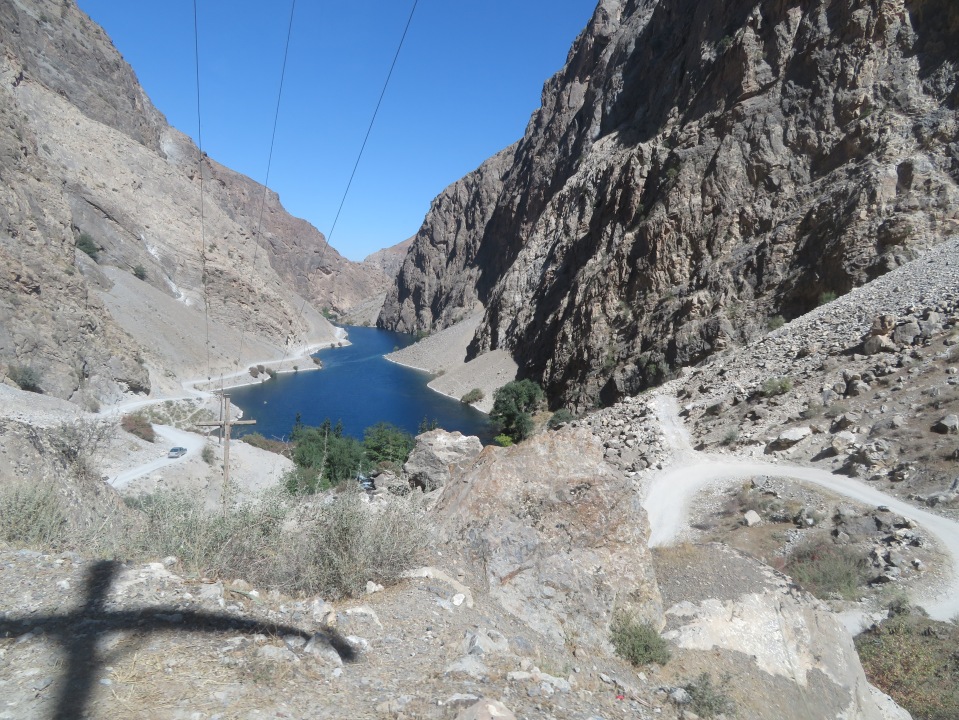 Given my praise of and pleasure in this tiny history-rich country, I’m going to include a small piece of background remembered from our chatty and informative guide, Beck, and stolen from Lonely Planet. I did read a few books that touched on history and politics in Central Asia before the trip but now, when I leaf through them for specific references to Tajikistan, few appear. Fortunately Scott’s bible, Lonely Planet, comes through again. “Tajikistan, always something of a poor relation given the challenges posed by its geography and topography, shares much of the history of neighbouring Central Asian nations.” There are some differences however. Tajikistan has strong links to Persia/Iran that go far back and it continues to maintain the language and cultural connections from that long-ago history as part of the Persian Samanid dynasty (of which Samarkand and Bukhara, now in Uzbekistan, were major cities). Eventually the Turkic peoples occupied the region and to a large degree absorbed the Tajiks. Of course the Mongols and Tamerlane conquered almost the entire territory at one time or the other so the blood of all of Central Asia flows through local veins.

Beck was quite proud of the Persian connection; he being half Tajik and his wife, wholly Tajik. Seeing the people change in appearance as we traveled from Uzbekistan all the way to Kazakhstan was one of the most interesting aspects of this trip. The Uzbeks and Tajiks overall reflect the Persian/Iranian heritage to a greater degree than the Kyrgyz or Kazakh peoples who are more typical of the Turkic or Mongol peoples and appear more Asian. This is of course a huge generalization so you must understand this discussion of appearance comes purely from my untutored observations and Beck’s comments. More about recent Tajik history in tomorrow’s post.

On Tuesday, September 17th, we were collected at our hotel by a driver who shortly thereafter had us at the Uzbekistan-Tajikistan border. We had an easy walk through border formalities with our visas all in place, and were greeted on the Tajikistan side by Beck our favorite guide of the whole trip and Amok our truly expert driver who kept us alive on some of the sketchiest roads I’ve ever seen. Scott booked the guide and driver through a Tajik travel agency recommended by Caravanistan, an information service highly recommended by … who else … Lonely Planet of course. With extremely exciting roads in some areas and almost no English spoken anywhere, it was good advice. 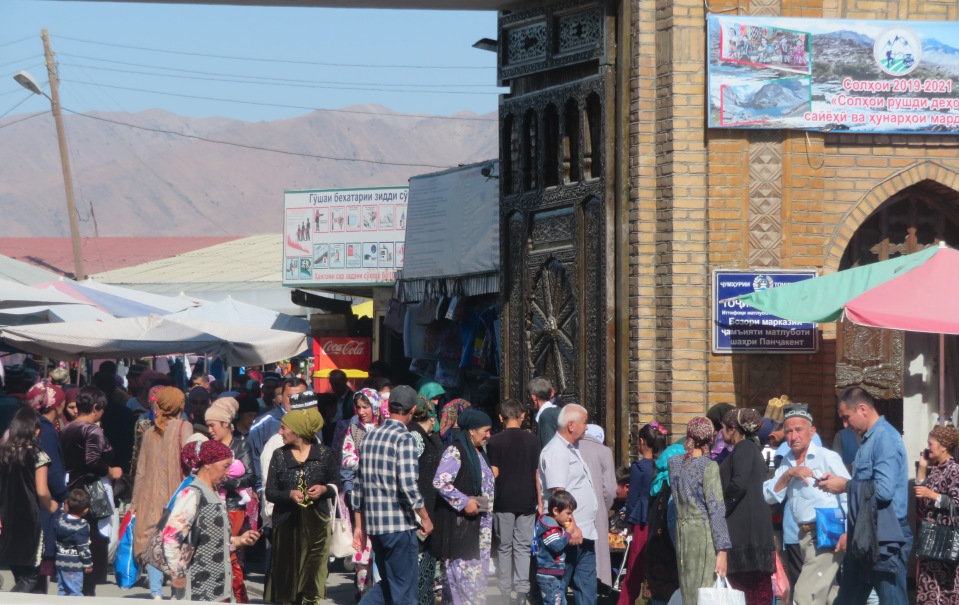 We stopped briefly in the small city of Penjikent then drove for a few hours to the Seven Lakes region where we would have a hike and an overnight stay. The main roads are good, the byways not so much but the mountains and lakes and tiny villages full of colorfully, beautifully garbed adults and wildly waving kids made every bump and deadly switchback worthwhile. 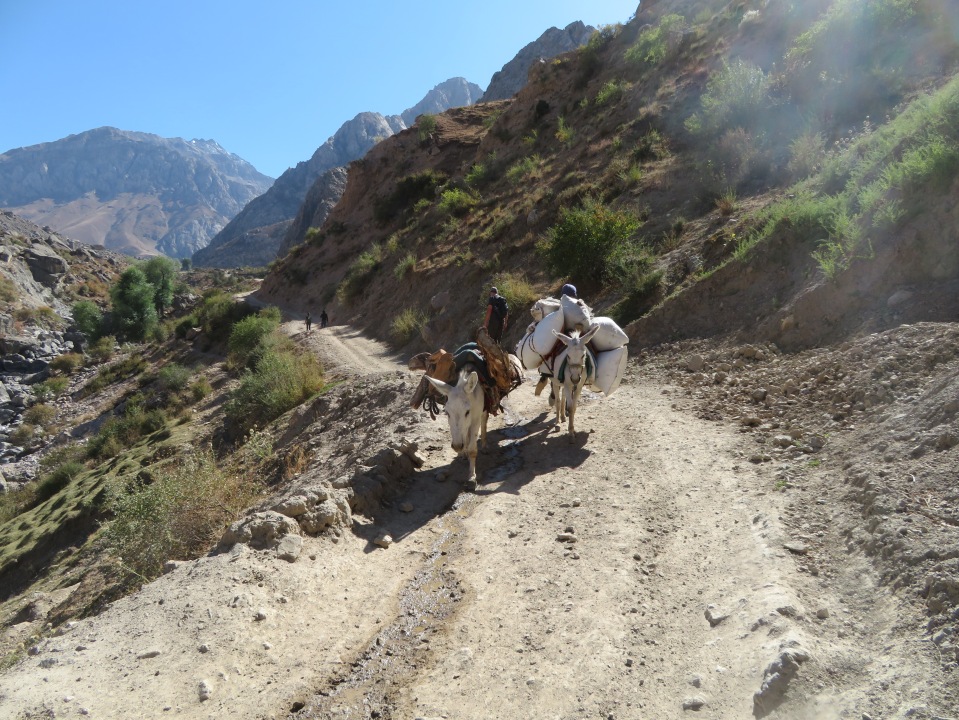 The destination was Haft-Kul or Seven Lakes. We wound along slowly with Beck regaling us with facts and entertaining us with local lore, stopping at each of the lakes for a leg stretch and photo op. Lonely Planet offers a lovely few paragraphs describing the Seven Lakes region which I’m just going to straight up copy as it’s well-done and saves me a certain amount of adjectival labor.

The first lake is an astonishing azure blue, the next four are aquamarine and the sixth is a pale turquoise. And the final lake needs to be seen to be believed. Six of the lakes are just about accessible … by 4WD, but the final lake (Hazor Chashma) is most enjoyable reached on two legs…. The walk to Hazor Chasma is one of the most lovely walks in the region. It’s an easy 2km ascent through beautiful wild flower meadows, above Marguzor village, following a racing river whose waters rush down the hillside to the six lakes below. There’s a satisfyingly broad shore at the mouth of Hazor Chashma offering a perfect opportunity to picnic by the water’s edge. (I must add that one of the lakes was a most unusual shade of royal blue, a blue I’ve never seen in any body of water before)

Time to adjourn to the sixth lake where our guesthouse awaited. The only lodging in these mountainous areas are guesthouses operated by the local mountain people. There has been a serious effort in recent years to assist the villagers and farmers in establishing these places for travelers to stay in the simplest of surroundings but with some basic comforts like beds and—‘praise be’ as Offred would say—non-squat toilets. Since the accommodations were booked by the agency each evening was a highly anticipated surprise…arriving and settling into a brand new environment and looking forward to a family-style dinner in a remote Fan Mountain village. 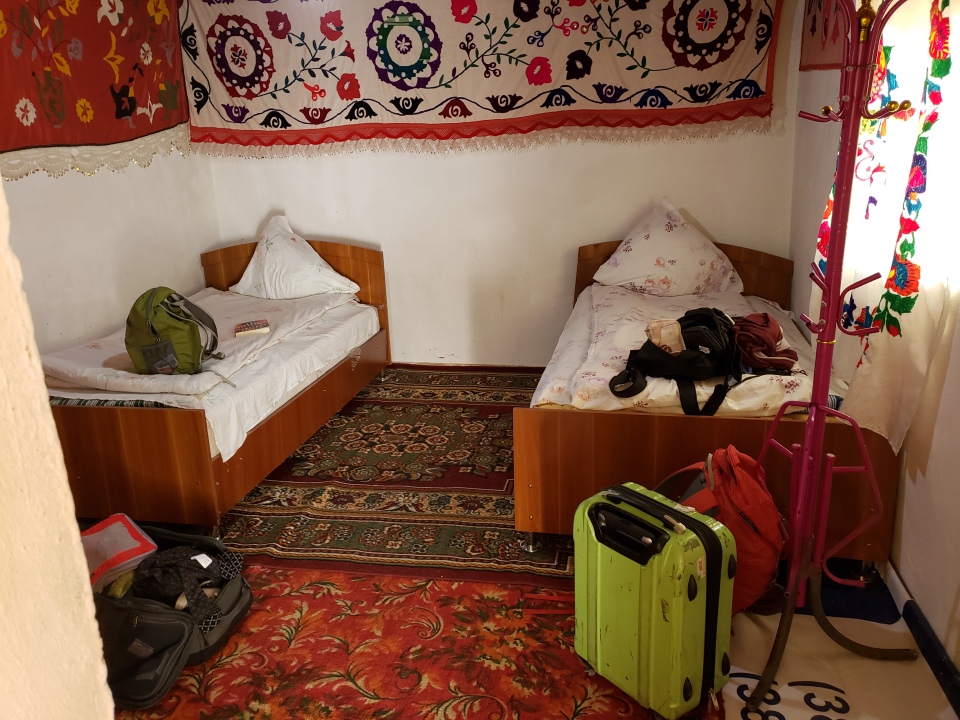 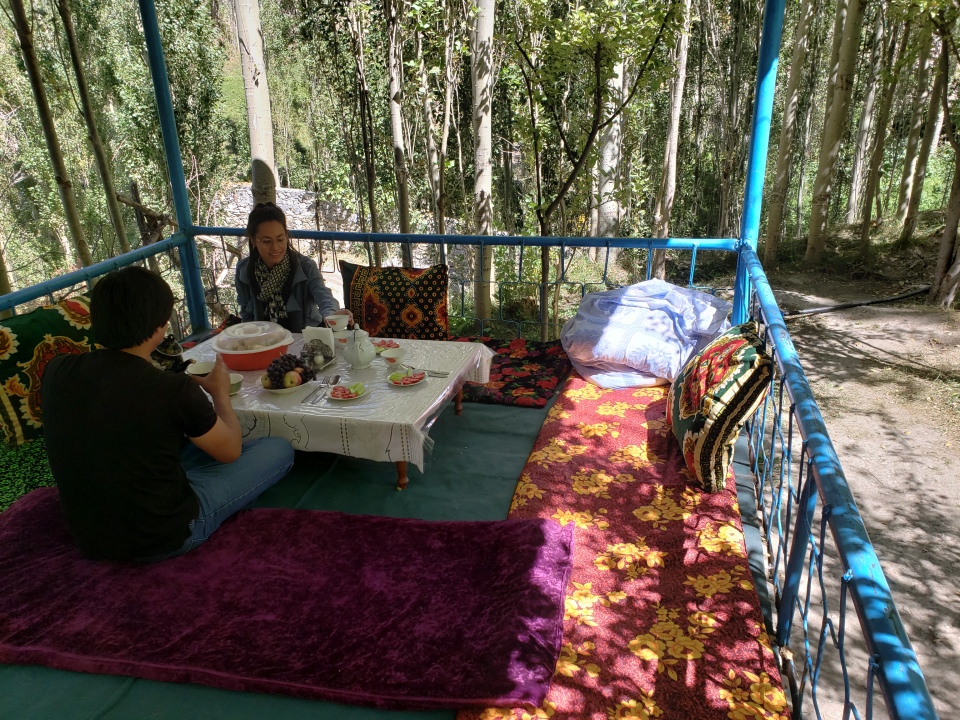 This evening was perfect. Well, Scott didn’t have any toilet of any kind in his room but Lace and I were thoughtful enough to let him use ours. And it was a might chilly at such a high  altitude but we didn’t travel this far to sit around streaming Netflix with the thermostat turned up did we? It really was just the right amount of adventure for me; Lace and Scott might have opted for a notch up on the rugged scale although Lace seemed quite happy with the brief moments of warmth from our little wood fire (someone from the kitchen built for us since we non-smokers no longer have matches at the ready—and really don’t know how to make a proper fire anyway). Scott also expressed some concern about where he’d pee if he woke up in the middle of the night and couldn’t get into our locked room; even though we were in the middle of pure forest, there were other campers around and holes in the ground to fall into and large hungry bears (or not) or dangerous snow leopards (actually not them either). So perhaps we were all okay with being this brave and daring and no more. 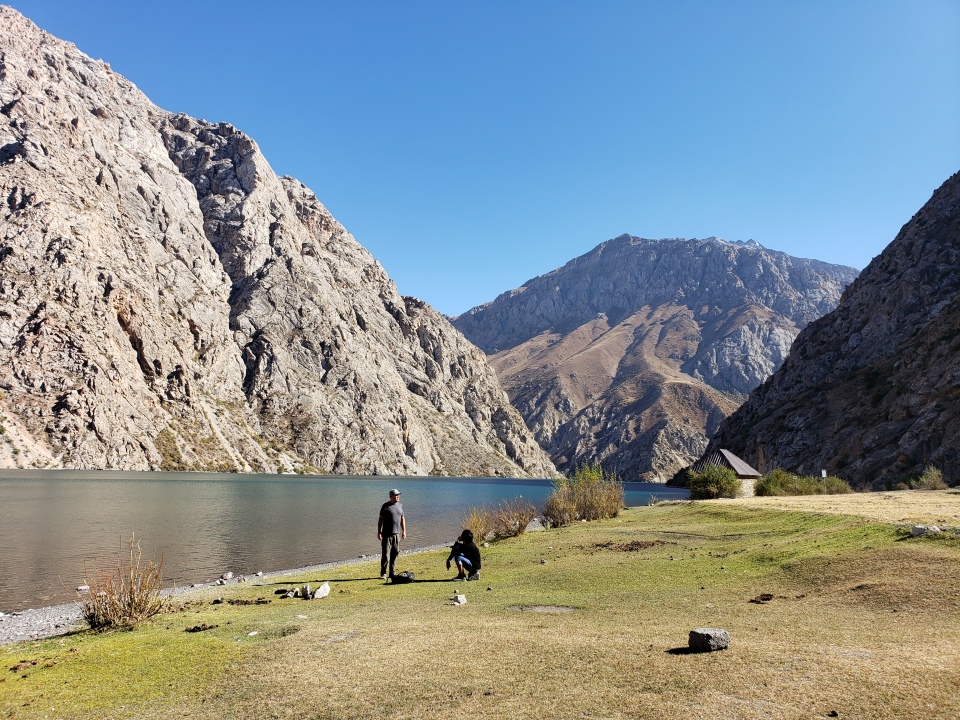 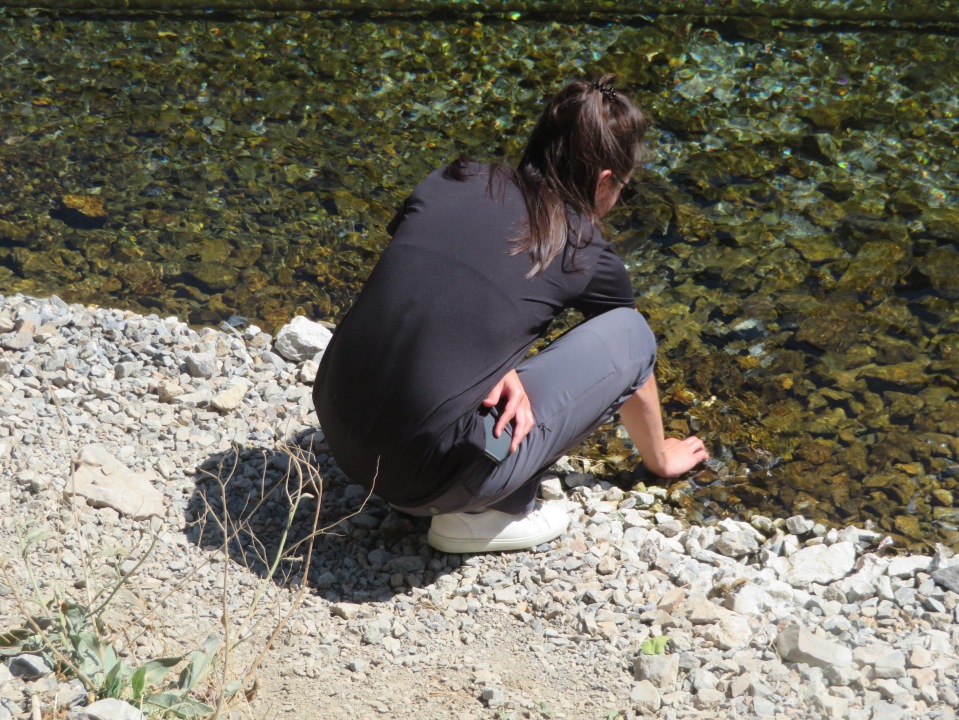 ← DON’T FORGET SAMARKAND
TAJIKISTAN AND THE NEXT PERFECT DAY →

5 Comments on “I LOVE TAJIKISTAN”