Lesotho: Country #84 on my world tour. Remember the rules (to count a country as having been visited) are that you must have read at least the Wikipedia description of what your new passport stamp represents; travel around on that country’s surface roads or streets or tracks or paths for a few hours; eat something local (like the Lay’s potato chips from an authentic Lesotho service station where you also use the facilities); and take photos.

It is not that hard although it does take some time and money. But along the way you will likely have the experiences that stay around in your memory long after any particular flight, hotel or special cuisine has faded into oblivion.

Yesterday, Lawrence Kwinda, who owns and operates Kwinda Tours and has become a friend over our trips to Johannesburg and Dance Umbrella, drove me to Maseru, a most undistinguished town, just across the border in the Kingdom of Lesotho, a peculiar little enclave totally within South African borders. 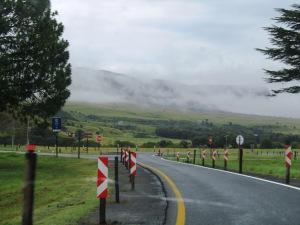 It was a 14-hour day mostly in the car, snacking on road food, and viewing many miles of South African and a couple of hours of Lesotho countryside. A day not so different from any of my 12-15 hour drives to San Diego or Minnesota.

Except that my passport is now just a little weightier and, Lawrence being a prolific historian, ethnographer and storyteller, I am far more engaged in and knowledgeable about the past and present of South African people and places. 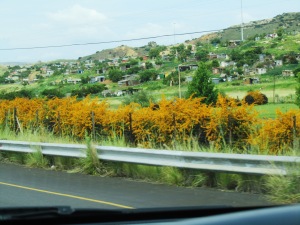 In the car–through the countryside

The drive from Johannesburg to Lesotho is pleasant, the scenery mid-America-like with flat or gently rolling cornfields and cattle ranges. We crossed the Vaal River and the adjoining Transvaal countryside and Lawrence pointed out markers of Afrikaner history which are prominent in this part of the country. While wisely not throwing away an often painful past, South Africans are busily locating and studying the original South Africa of the Xhosa, Zulu, Swazi, Ndebele, etc. When these accounts are fully incorporated into the already thoroughly documented Dutch/ British/Afrikaans narration and the stories of this last astonishing century then the magnificent tapestry that is South Africa will be complete. It’s not at all dissimilar from what we are doing in the States at the insistence of Native Americans whose history is finally on the road to being acknowledged and appreciated.

Sometimes it’s all a blur

Even if one has a general interest in history, what makes it all immediate is connecting a friend or acquaintance or family member or hero with a time and place—linking past and present. In this case, Lawrence, but also through one of the artists here—more about that later. 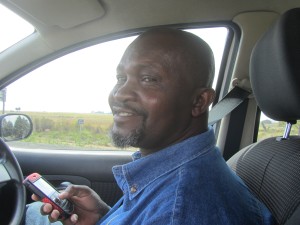 The history that became real to me was that of the Lemba tribe or Black Jews of South Africa of which Lawrence is a member. The Lemba have traditions completely unlike any other African tribes or ethnic groups and similar to many aspects of Jewish culture. I only had the vaguest of knowledge of this and now suddenly I know someone from this most mysterious and fascinating of people. If you’re curious here’s a good link: African Lemba Tribe – eNotes.com 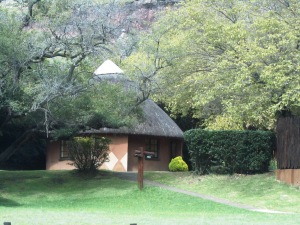 The almost six hour drive to Lesotho was packed with Lawrence’s stories of his life and times, becoming a successful entrepreneur while exploring his own background and celebrating the political and social changes in South Africa. Doesn’t get any better than a road trip with road food (potato chips and yogurt drinks) and good stories.

The little piece of Lesotho we managed to experience consisted of the miles between one check point and the next which was in the city of Maseru. While we enjoyed the assortment of green hills, rocky outcroppings and modest red cliffs, the real sights of the Kingdom were obviously in those distant mountain ranges. That is always the problem isn’t it? So many inviting skylines, so little time.

And just on the other side lies………

Lesotho is a poor country with a huge HIV/AIDS problem and the disparities between it and its huge rich neighbor on all sides, South Africa, is apparent the minute the border is crossed. It seems the big attraction in Maseru is gambling with the main cultural attractions being casinos!  Since it was Sunday the Visitors’ Center was closed as were the nearby restaurants so our visit to Maseru was short.

Back home through Bloemfontein and a look at its quiet Sunday streets and into Johannesburg, tired but happy. A new stamp in the passport, good stories and feeling of being a little more connected to the land of South Africa.

Outside of Bloemfontein, commemorating the horses of a particular battle/war