LAST NIGHT: I spent last night with a very pleasant Chinese man. We shared two meals and slept for seven hours only inches apart. Our communication was fairly typical for encounters of this kind: we exchanged the basic pleasantries early on and then had a brief, slightly more intimate, exchange upon our leave-taking. I did not detect any sociopathic tendencies during our hours together, only an endearing trait that makes him a real sleep-mate—he sleeps with his head covered. I am rather looking forward to tonight. Another night, another man—or woman as the case may be. Meals, intimate exchanges, sleep. Alas this did not happen—three seat configuration in this very nice Airbus, shared by a German couple who spoke—German!  The closeness, the intimacy—all gone.

LOOKING FOR GEORGE: Life on the road…me and George. I keep searching for him…in every airport…in all the world…hoping that there he’ll be—right over there in that waiting area or standing in line at Security or picking up a yogurt and a Herald Tribune at that kiosk. And maybe, just maybe, tonight I’ll be with him. Although with a million frequent flyer miles I don’t suppose he’s traveling economy class! Damn, seems I missed him altogether on this trip.

WIENIE TOURIST: I’m in the cozy restaurant overlooking the runway at the Frankfurt airport, eating FRANKFURTERS as one should while here. This airport is the only place I go in Germany so…and when in Germany one should …. But the frankfurters look and taste like the most ordinary of American wienies and the potato salad is quite oily but also sweetish and tart and rather nice in its own Germanic way. I had to go through fairly rigorous security twice to have these frankfurters– with large mean women manning the posts. But then I land in at the Oliver Tambo Airport in Johannesburg which is clearly one of the nicest airports in the world so all is well.

ABOUT LAST NIGHT: I really should say a little more about last night’s companion. Because he is taking over the world you know. From Beijing –in Houston to open a new business—a welding business. His firm distributes welding supplies and he is very excited about the potential of Houston and all of Texas out there welding away with Chinese equipment. But now he is on his way to Barcelona to check up on one of their Spanish distributors. AND he has been in 70 countries, almost all in which his company has business interests.  He was very impressed by my 83. No one else is ever awed by that number because most Americans have no clue about how many countries there are in the world. So at the moment I’m okay with the Chinese at the top in the new world order. (Not really but it could be worse—as in Republicans)

The world is still SOMEBODY’S OYSTER…Whose?

AND IN THE NEWS…: I spent 48 hours before I left without turning on TV because I couldn’t. I had Direct TV suspend my service! So by the time I saw Anderson Cooper on the airport TV last night I felt very happy…for a minute…until I realized he was still talking about how Whitney Houston died. Hey America, the Chinese are taking over the world, there are strikes and economies going down in Europe, women are running some countries and doing as well as men (maybe better), people are starving and fighting and dying and the ocean is rising and Anderson Cooper is still talking about Whitney Houston. I WILL BE OKAY WITHOUT CABLE. Read newspapers everyone. And watch “The Good Wife” on your computer. IN JOZIE now…Jozie is how the real Johannesburgers refer to their city. I love it here—in Jozie. 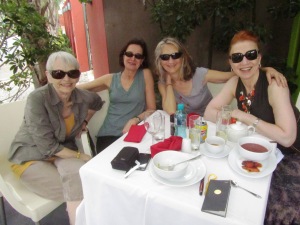 2 Comments on “One Night Stands”