Sue and I were young Air Force wives living on Seymour Johnson AFB in Goldsboro, North Carolina. We each had one husband and two children; all of us healthy and happy and fitting some American-image well enough to have posed for Norman Rockwell. Sue, Ken, and the girls were already living on Bolling Drive where they’d landed after a tour of duty in Okinawa, when Don, I and the boys moved in across the street, fresh from two years in the Philippines. We were surely destined to be friends…but who knew it would be a friendship of the kind of depth and duration that it turned out to be. It was 1966.

Sue died a few days ago after a debilitating illness that stripped her of life’s pleasures and comforts. I hadn’t seen her for a number of years although we talked now and then on the phone, still maintaining some core of that partially unraveled but nevertheless unbreakable bond established back in the 60s.

So once upon a time…there we were. Living across the street from each other. I don’t remember exactly how we met but given that our kids were the same ages, Kim and Scott six years old and Pam and Steven about three, we were bound to start talking sooner rather than later.

Sue and I must have consumed a million cups of coffee in our years together—our drug of choice—although it did compete with cigarettes for that honor. I suppose that’s when our friendship was cemented, sitting in one of our yards as our kids ran wild in that safe and secure neighborhood called base housing. We were of similar backgrounds in many ways (although Sue grew up in the epicenter of racism called Mississippi and I grew up in liberal Minnesota); we both came from families with financial limitations (hers less severe than mine) and an overabundance of religiosity (in Sue’s case extreme—and she would resent fundamentalism’s early takeover of her family for the entirety of her life). Our 1960s’ circumstances were even more alike: pretty young women in our mid-twenties with pleasant-enough husbands and yes, those requisite two kids each. There were differences of course, Sue worked at a bank and I started college; Sue was keeper of an immaculate house, me not so much. But we were always together after the banking, studying and house and kid maintenance talking…drinking…smoking..

We drank coffee and smoked cigarettes in most of our spare hours. I wanted to include a poem or song here in honor of those days. I found several tunes but the lyrics weren’t quite right. Ditto the poems Besides, it is so very politically incorrect to sentimentalize the pleasure that was available from smoking cigarettes. And to admit we subjected our children to clouds of nicotine in their formative years…sorry kids. Nevertheless I persevered and found some lyrics that are just right. First from “Coffee and Cigarettes” by a band called Jimmy Eat World: Coffee and Cigarettes/As simple as it gets/Of all the things I think I’ll miss/There’s staying up with you/Coffee and Cigarettes/Coffee and Cigarettes. Could be our theme song.

Here’s another that fits. “Cigarettes and Coffee Blues” by cowboy singer Marty Robbins:

I guess I’ll take a walk tonight, I know that I can’t sleep
And I don’t go to bed at all, I just lay there and weep
Instead I’ll make our favorite spot, that’s what I think I’ll do
I’ve got those smokin’ cigarettes and drinkin’ coffee blues

So I’ve said we were happy. And in a way that’s true. But we were also restless, trying to figure out what could possibly be missing from what I’ve pictured as a Rockwell-worthy lifestyle. Looking back it’s hard to describe what wasn’t there…And what we would keep searching for the rest of our lives.

Our friendship continued, if sometimes in a halting way, until Sue’s death just days ago. Our dual searches for that Sixties missing ingredient had taken us in different directions for much of the time. And, although we talked occasionally—when her love of several decades died, when something tragic happened like Trump’s election, etc. and we saw each other’s photos on Facebook—we neglected to get together. Too busy? Or did we somehow think our ‘coffee and cigarettes’ friendship should be left intact—not subjected to the cynicism of our elder selves?

I know we missed each other sometimes…but what we missed most were times and places of being younger, our lives brimming over with dramas, both petty and real; our kids moving off and on center stage; our jobs exciting and frustrating by turn; the men in our lives not husbands, but lovers; our bodies smooth and strong. Now, here I am in 2020 mourning my friend Sue…actually it’s not that simple…I’m mourning us. The practically inseparable us. The leading-separate lives but talking almost daily us. The occasionally getting- together us. Most of all though I miss the coffee and cigarettes us.

The BFF phase of our friendship starting back on Seymour Johnson AFB: Sue, remember when you and I and Bonnie took our black and white kids to a Carolina beach and the women on the next blankets over gathered up their kids and moved on down a ways? Remember when you were still working at the bank and I’d started school and was off for the summer so I was watching Pam and Martin Luther King was murdered and I, glued to the TV, forgot to go pick her up at school?  Remember the beautiful Thanksgiving dinner, table prettily set, turkey glistening golden-brown on the sideboard—we were all sitting in the yard (perhaps with a beer since we weren’t sophisticated enough yet for wine) and we came back in to your cat daintily nibbling on one drumstick? Remember Scott in frustrated tears because Kimmie had socked him and he was told firmly by his father that he couldn’t hit her back because boys did not hit girls? Oh yeah, remember that restaurant manager who fell in love with you when he did his banking, gave you fifty dollars and said take your kids and go to the beach. So we did—wondering briefly if that somehow obligated us to him. Nah, we said, let’s go to the beach.

I started this post thinking I would tell the whole story of our friendship but, even as the earliest memories appear through the fog of time, it’s obvious that would be a book…so here’s a wrap…encompassing the last 50 or so years. 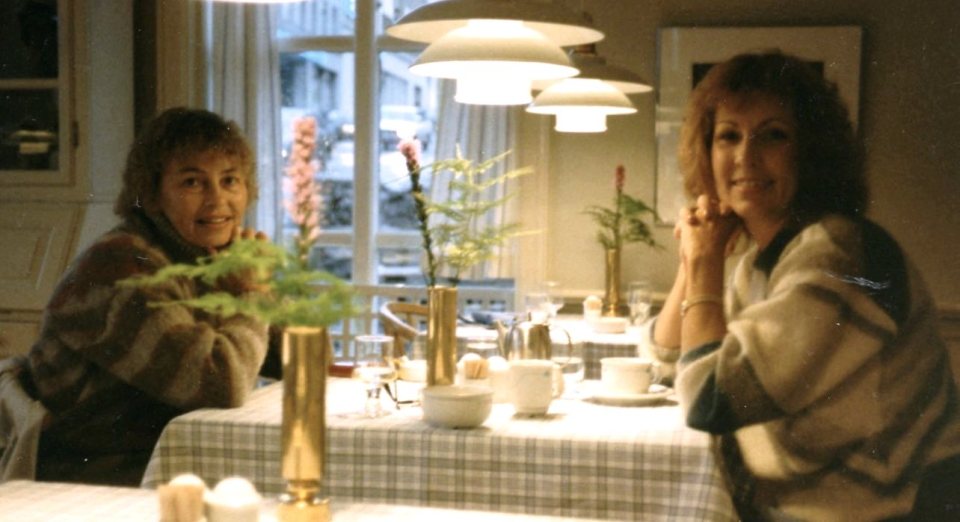 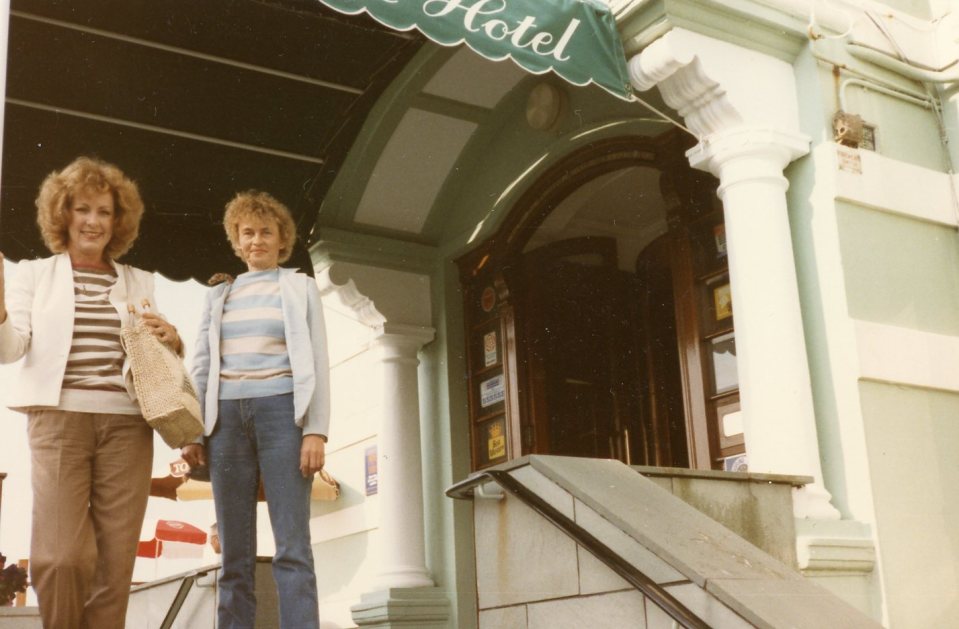 AFTER OUR DISASTROUS ROUEN DUCK DINNER ON JOAN OF ARC SQUARE. YOU CAN READ ABOUT IT IN THE BLOG FROM THAT TIME.

We went on a girls trip to Europe. Google “A TRAVEL STORY INTERRUPTION. Back to the Beginning. The Skyr, A Scone and THE DUCK. 1984.”

Sue and family moved to Dallas; my family to New Mexico. We divorced our husbands. Our kids grew into rambunctious teenagers, then responsible adults. We had jobs and lovers and visited each other with some regularity. We acquired Master’s degrees in Social Work.

SUE GRADUATES WITH HER MSW.

Sue ended her work life some years ago and devoted much of her time to being the most devoted of great-grandmothers. Her great love of many years, a man who lived elsewhere—in spite of which they maintained a strong attachment—died only a few short years ago and that, combined with health issues proved more than even her fierce determination to live could withstand.

AWHILE AGO. L-R TOP: PAM, SUE. BOTTOM: RYAN (WHO NOW HAS HIS OWN DAUGHTER, ME, KIM, AND MEGHAN.

I’ve been talking to her daughters…it seems to reaffirm the value of friendship when I realize how close I feel to them. We’re planning a time later this year when Sue’s girls and my boys can get together…I’m looking forward to sitting on the sidelines and enjoying the reunion…with a very large cup of coffee in hand. If I didn’t think it’d make me ill I’d have a Winston to go with it. And our assembled ageing-children could berate me and Sue in absentia for the damage inflicted upon them!

I always thought of Sue when I played the old songs and I did imagine us ‘years from today.’

Can you imagine us years from today,
Sharing a parkbench quietly
How terribly strange to be seventy

← TRAVEL IS NOT ALWAYS PRETTY. IT’S BETTER THAN THAT.
WONDER WOMAN AND THE JOKER →

2 Comments on “COFFEE AND CIGARETTES”