I’m sorry to say the days of polar bear and walrus photos are forever gone but there are cats on a step and sheep in the field and swans in a pond and fish in the soup if you continue on…best I could do.

The colored wrapping for the hay bales signifies that a percentage of the cost has been contributed to cure a particular disease.

IIt’s All Happening at the Zoo

9am: The Britannia, a cruise ship holding 3,647 people is parked directly outside my window. Arne had warned me this could happen since I’m right on the waterfront—I’m not sorry because it’s sort of a zoo-like opportunity. Watching the captive creatures released for a little fresh air and sunshine in a real place, where they will spend a ton of money on souvenirs and a bit on food—but when there are thirteen restaurants and thirteen bars on board, why would you bother with actual Norwegian Fiske suppe in Norway. They keep streaming off the ship, looking like such normal people, taking pictures of my house, thinking they’re photographing the natives.

One of the Britannia’s ads says ‘imagine the excitement of cruising in a five-star hotel.’ Is it reverse snobbery to say that having stayed twice (briefly) in five-star hotels I’m willing to go out on a limb and attest to that level of excitement being comparable to watching grass grow. Oh sure there’s the moment when you realize the bathroom is bigger than your apartment…but how long can you revel in that…or fluffy bathrobes, when you have one at home…okay so I’m poor and crochety, ignore what I just said.

Still…it is a fact, a true fact as opposed to a factless fact, that while five-star hotels are maximally comfortable, they aren’t very exciting…so if you put one on water, where most of the time there’s even less to see and hear and the vehicle is too big to feel the roll of the sea…it’s still not exciting, right?

In fact Mein Schiff 4, which only holds 2,790 passengers, is parked just on the other side of the Britannia so I’m forced to admit, desirability is in the eye/brain of the beholder/experiencer. Mein Schiff 4 (built in Finland) is registered in Malta; it’s owned by Germany entities and Royal Caribbean; its ships were first registered in Liberia, then the Bahamas, and now Malta. The Britannia is owned by Carnival but registered in only one country in its history, the UK, so if I were going on a cruise (for example if I succumbed to serious dementia and my kids took me on a cruise in order to spend down my fortune) I’d want to go with the one that can actually be identified with real place–which Malta’s sort of not.

Personally, I never want to go to sea unless it’s back on the Linden or a ship almost as small. Even the Hurtigrutens are too big.

5pm: “Wise men change their minds often; fools never do.” Okay, well I haven’t exactly changed my mind about cruise ships, but I spent a few sunny hours out amongst the people-of-the-ship and they seemed rather normal, all sizes and ages and shapes and colors (well, mostly white). Then this afternoon over my Fiske suppe and wine I talked to the waiter for a long time about Stavanger, the good and bad of cruise ships and how the oil city came to be. He doesn’t like the cruise ships this close into the harbor, says the sea life is literally gone; that in many ports the ships rest further out and bring people in in smaller boats and it’s not as deadly to the marine environment. But he also described a Mediterranean cruise he went on and why he loved it. Part of that actually sounded wonderful—not the part about ‘like walking into a shopping mall,’ but about effortlessly waking up to spend a day in a new city. Didn’t have to wait in line at the airport or drag your bags onto the train, just went to bed and the next day you either lollygagged about your suite or spent the day roaming about a cool city. I’ve always just thought about the shopping center part or the crowds of people part…so there’s another side I guess. I’m still sticking with the Linden model of sailing for now though. 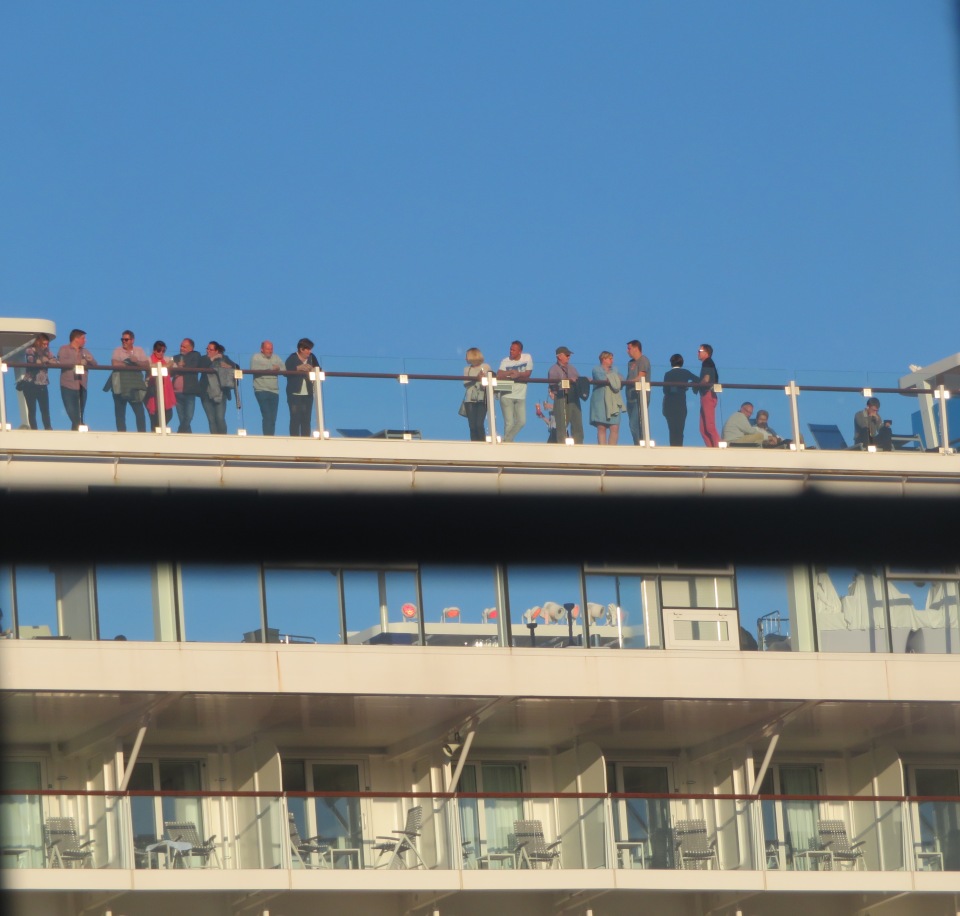 The Britannia has left the harbor, waiting for the Mein Schiff 4 to leave now, and my quiet little bay will be back to normal.

Daily Life and Murders: My life on the road is authentically exciting however. First of all I did two 2½ minute planks yesterday so my back is most unhappy, then the fire alarm system went off in the middle of the night—no problems, just a little startling, and now over 6,000 people are stationed directly in front of me—and since 2,000 or so probably stayed on board…if I had good binoculars…I could see when the murder actually takes place and possibly even the body being thrown overboard…no that will have to be tonight out at sea. Did I mention I gave up on the Dylan bio for the time being and reverted to reading one of my favorite Norwegian murder mystery writers? In the US every place is the potential site of a real mass shooting; in Scandinavia around every corner lurks an innovative (but not real) murdering weirdo.

History and Writing: The purpose behind scheduling almost a week in each of my three September stops with just a final few days in Oslo, was to have family time as well as undistracted-by-everyday-obligations time to make decisions about continuing to write The Book. I must say it is quite a good plan. So far in Stavanger, I’ve spent an  evening with Arne and Aslaug over a delectable salmon dinner in the company of Gunnar (Arne and Aslaug’s son), Sam and their beautiful daughter who is also something of an athlete. But right now I’m off for a walk about town.

Yesterday afternoon included a  history tour to the Utstein Monastery (mentioned in historical records going back to the 9th century, when it was cited as King Harald Fairhair´s garrison after the battle of Hafrsfjord, where Norway was unified under one monarch. Construction of the Monastery started in about 1260, although some parts may be older and may date from an earlier royal farm on the site.) and then coffee in my garret. And since, this little apartment could definitely qualify as an artist/writer’s garret, I’m on my second morning of book ideas and decisions. With the essential blogging (and snooping on the cruise ship occupants), coffee, and planking breaks. 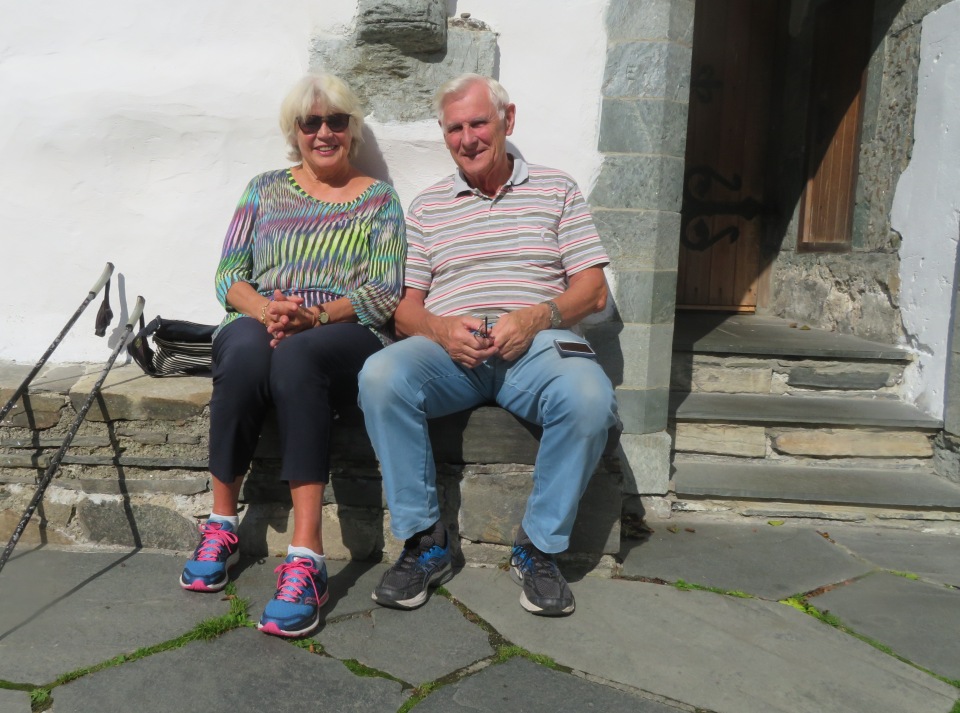 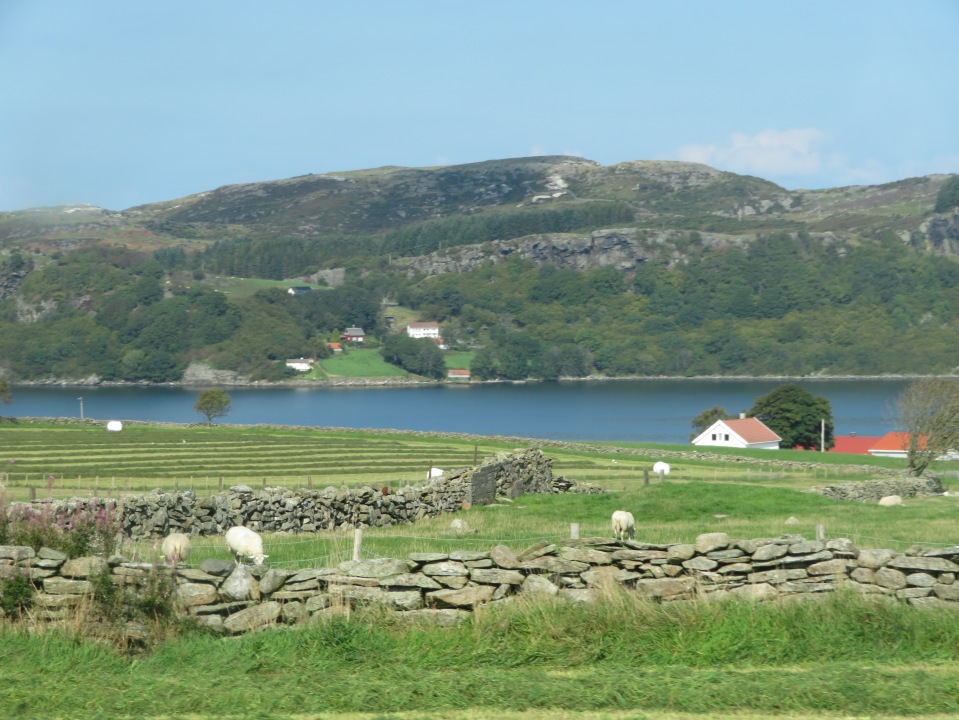 It is still hard to focus on the book-writing plan I admit. I’ll get better at it each day and by the time I get to Neset Camping where there is nothing to do for one week except walk to the village for fresh rolls and write, I’ll be very good at it. I say.

Fiske suppe and the Grocery Store: Mellow afternoon out in a pleasant city on a late summer day. I’ve already talked about the cruise ships so this is just to add a note about finding the grocery store (sautéed spinach with scrambled eggs tomorrow night) and finding more Roros butter so in a short while I will have Wasa crackers with thick layers of butter and a sweet Activia yogurt (with pictures of grain on the front of the package but I can’t tell exactly what’s in it—whatever it is I hope we have it in the US soon). A balanced meal in other words.

Enough with the chatting. Back to the book outline for awhile and then I’ll download the day’s ever-so-exciting photos of cruise ships and fish soup.

Arne, in their new retirement apartment.

One of the views from the new apartment.

And here’s the last of the day’s wildlife.

← THE END OF AUGUST
ONE OF THOSE TRAVEL MOMENTS →