The focus moves to 7-year-old Svein in the second section of my story about Grandma.

Asborg’s mother hired a photographer to take the picture that would be all she would ever see of her daughter and grandchildren again. It would also be our only glimpse of the Nesets in Norway. There’s my dad standing in back, his head tilted wistfully as he squints into the sun. His twin sister Ellen leans against her grandma. What on earth did they think was happening to their worlds? 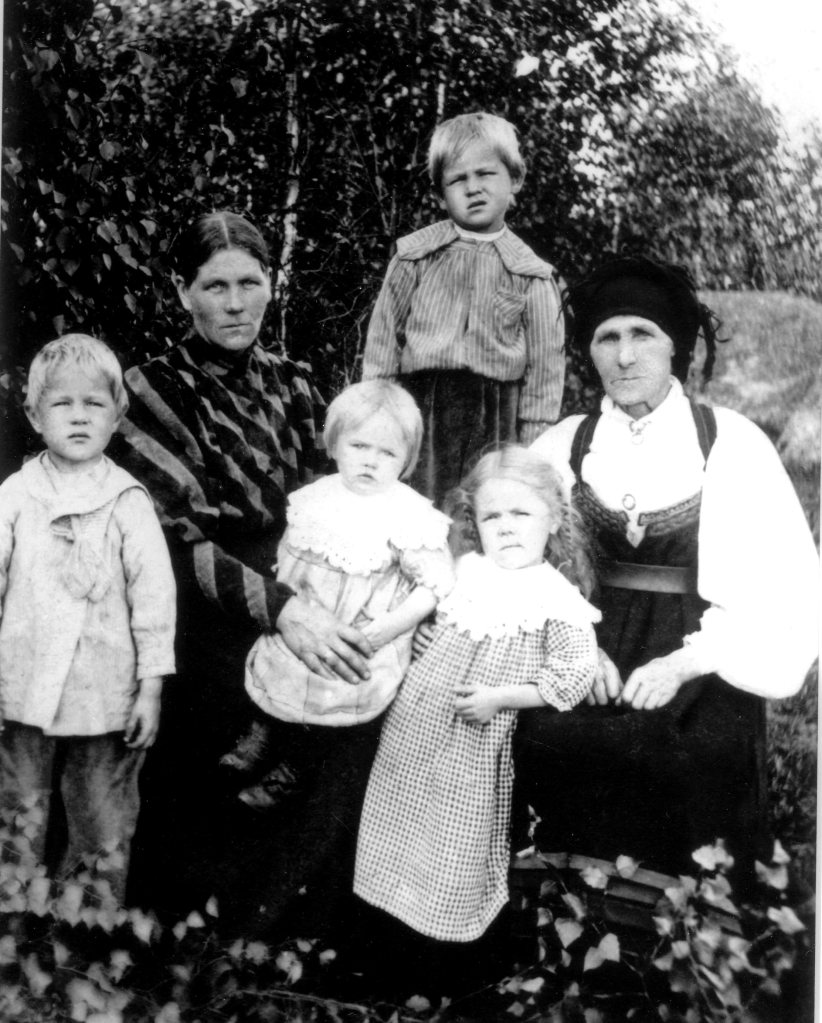 Now it’s a May day in 1910 as Svein and his friend Nils burrow further into their pretend cave, they can no longer hear Asborg yelling. The big gray boulder with the dense little thicket of pine trees is their special hide-out.

The boys grin at each other. They look like muddy elves with white hair sticking up in all directions, ears protruding, faces and clothes dirt-smeared. “She doesn’t even know where my things are anyway.”

“What things?” Nils wants to know.

“You know, my white rocks and the stuff we found out by the road, that old medal and the iron ring. I’m not gonna tell her either cause she’ll just make me throw it all away.”

“Because mor says ‘there’s no room in the sacks and besides they’ll have new things in America.’ That’s what she says…how does she know, she’s never been there.”

“I hate America. I don’t even have friends there.” He starts to cry.

Asborg stands at the cabin door. Tired. Always tired. The two big sacks and the old cracked suitcase are behind her in the middle of the room. Eilif and Gyro, the babies of the family, sit by the table, each with a piece of bread and jam that’s smeared on their faces along with tears and snot. Asborg yells again, “Svein, Kom hjem I said.”

The child comes reluctantly, but soon he’s gone again, twin sister Ellen with him this time. What hard children they are to figure out, so serious and always defending each other. She’d better try to get them in; they need baths and rest for tomorrow. Her mor Ingunn has come to help.  “Barn , kommer i nå,” she shouts.

Svein and Ellen sit just on the other side of the rock, looking out at the water. They poke their sticks in the damp black soil without talking. They never talk much anyway.

“Svein, what do you think it’ll be like? I can hardly remember pappa. Do you think he’s nice?” She looks ever so earnestly at her brother.

Svein says, “I don’t care what mor says, I’m taking my things along. When she wasn’t looking I stuck all of ’em way back in one of the big sacks.”

“I’m going to take something special too. That tiny doll Tante Martha gave me. The one with sparkly things on her dress.”

“That’s silly Ellen. I’m going to throw it over the side of the boat.”

Ellen punches him and they run laughing toward the house.

Almost before they know it, two days have passed and they are on the wharf in Kristiansand.

So many families crowding together, several pointing to where the S/S Hellig Olav awaits them, out where the deep water starts. Even from here it looks big. “Herregud,” Asborg exclaims, “Oh my god, how can it ever float?” It is too big. It’s like a giant waiting to swallow us, isn’t it mor Ingunn?”

This worries Svein who, at seven, knows quite a bit about giant trolls who live in the mountains and swallow small children whole. “Nein, nein mor, it’s a big ship, it can’t eat us. That’s silly; you’re just trying to scare us aren’t you?” For just a moment, Asborg and Ingunn almost smile.

Ingunn mostly just stands, straight and silent and solemn; no one ever takes her for a true Scandinavian, she’s all dark planes and angles like a brooding Picasso creation. Ingunn doesn’t really understand this family exodus. Her other daughters married farmers from around Setesdal Valley who aren’t going anywhere, solid men content with the hard work of farming. Only Asborg chose badly—the restless ne’er do well Torgus who’s now lured her daughter to a place so far they’ll never return. As the crowd shifts toward the end of the dock and this little group halts, the next to board, Ingunn moves closer to her Asborg who stands as motionless and mute as Lot’s wife except for the tears coursing down her prematurely weathered cheeks like rivulets from a melting snow bank.

A crush of weeping countrymen is struggling ahead toward the small steamer that will carry them out to the smoking, belching, heaving leviathan looming so ferociously on the horizon. Last murmurs and mutters. Four-year-old Eilif clutches the stiff black wool of his grandmother’s skirt, “Bestemor, I stay with you…please please.” Ellen pulls on him, trying to get him loose to move forward as those at the front of the line climb into the first of the boats to load. Families begin to tear apart.”Eilif, hold opp. You are not a baby. Come on now. We will go to the big ship. See, look out there. We go to it.” Firmly in his sister’s grasp, the small pale boy with the tear-smeared face still rages against the unknown.

Many old grandmothers are wailing, but not Ingunn. Until now stoic, as befits the image of a dour Scandinavian, but finally succumbing to emotion, she embraces her daughter, stiffly, almost formally, then tighter and tighter. Tiny Gyro, soon to be the darling of the Hellig Olav feels crushed and scared and joins Eilif in sobs and tears and flinging about. Only the twins, Ellen and Svein, remain calm, feeling quite brave and grown-up in the midst of the chaos. They are serious children by nature and very close. Holding hands and as curious about the monster on the horizon as they are sad about leaving bestemor who had never hugged so much before and, truth be told, always seemed to find their presence a nuisance. Now, releasing her daughter, and baby Gyro, she bends down to the twins, grips their shoulders and whispers “Gud være med dere, barn.” Yes, indeed, god be with you, children. “Farvel bestemor” they respond.

Now they’ve left the pleasant shores of Norway. “Ellen, Svein, you must never let Eilif go for a moment. He will fall out of the boat and there will be no more bror. I must hold Gyro or we’ll lose her too.”

The Hellig Olav grows bigger, rocking against blue water and blue sky on this sunny spring day in 1910. Asborg and her children are joining the roughly 800,000 Norwegian  immigrants that will take this trip between 1835 and 1925.