Have been without internet for a few days and in the midst of meeting new family members and visiting familiar places and people. Although I have started posts about much of this only one is completed so I’ll begin catching up by posting this sentimental (in a good way) paean to NESET (Now Neset Camping) in Byglandsfiord, Norway.

I am home. Byglandsfiord, Norway. From whence the small Neset family, Asborg and her daughters and sons—one of whom was Sven, my dad, departed. And I’m camping…playhouse-size cabin, bed and electricity but toilet facilities up the hill a short ways—that counts as camping, right? This is Neset Camping; Neset means small peninsula in Norwegian and this is the scenic bit of land and lake where my father lived until age seven. Another family shared/owned  the peninsula which juts out in long blue lake, called Byglandsfiord even though it is not a real fiord, between two user-friendly fir-green mountain ranges. So both families took the name Neset. And now we’re both here again, me for only days unfortunately.

My Neset family moved, some to Grendi nearby, my grandfather to America. My cousins Neset who stayed in Norway became successful educators, administrators and writers and continue to live in what is frequently deemed the richest and most peaceful of all countries on earth. Olav, son of the family who stayed here on this land owns and operates this small version of heaven called Neset Camping, a popular Norwegian campground. My Grandfather Neset, on the other hand, moved to that land of freedom and opportunity across the Atlantic where the father and sons became struggling lumberjacks. Turns out the American Nesets were never destined for the kind of financial success of which inspiring immigrant tales are made.

I love it here in Norway…completely irrevocably happily. I always feel a bit sorry for and a little superior to Americans who get that blank look when asked “What nationality/ethnicity are you?” Who respond, “Well, I’m an American of course.” Yes, your citizenship is American—as in the United States brand but, unless Native American, we all have our origins outside of the U.S. That’s an exciting fact; the U.S. just isn’t that old and yet we all get to share this long long history back into Norse or Greek or Swahili or Aztec gods and kings and be part of all those the new discoveries and old wars that emerged from our birth cultures.  I would hate to think my cultural existence extended only to Jamestown or Plymouth Rock or St. Augustine. So I’m sad for you ancestor-deprived people…I guess you get Cotton Mather as your original god instead of Zeus or Odin (the latter being the Norse god of war and poetry—and he’s mine). Too bad.

So back to Neset Camping. This little peninsula. Where the drinkable air gives me sustenance. The only other place I know where this earthy mossy water-logged clean fresh tasty air exists is my brother’s old place outside of Haines, Alaska.

As the name would suggest Neset is a real campground. Surrounded by water and mountains and trees and generously populated with merry bands of roaming rabbits and exotic chickens of all hues.

It’s dusk now and so unimaginably peaceful. There are many people here; Neset has been growing with Olav even making the small peninsula just a little bigger by filling in nooks and crannies with rocks and soil from the nearby mountains. Here it is all Still and Quiet. This is my third visit and there is never noise. There are cabins of all sizes and camping vehicles of all sizes (except those giants we see on American freeways). People, lots of people, sit outside conversing lazily and pleasantly in vacation-subdued tones, often just reading and gazing out over the peace of a cherished natural environment. Kids wander and play and giggle and whisper. No one is noisily under the influence, no one is arguing, no one is playing music, no one has ever been shot, arrested, or run over a rabbit or kid while steering their vehicle to the water’s edge. Olav did say a few years ago he had to get up in the middle of the night and tell some people to quiet down!

I have cousins and towns and more Norway stuff to write about—got behind while visiting family and Neset. What pleasure it is. And not one single soul has asked me about Breaking Bad! Finally I’ve escaped its pall.

Charcoal clouds are sailing over Setesdal Valley. The green mountainside will blacken soon and the pale boulders and rocks lining the shore of Byglandsfiord will disappear into the night. A spotty black and white rabbit is finishing up his grassy-greens. I am really so happy.

Not the least because I actually have a flashlight along to guide me up the hill for midnight visits to the facilities!

To bed now with Knausgaard. So far one cousin is somewhat indifferent toward the famous Norwegian’s writing, another is quite in love with the work and even her 90-year-old mother read every one of the six volumes. Anyway he is a good companion on a trip back home. 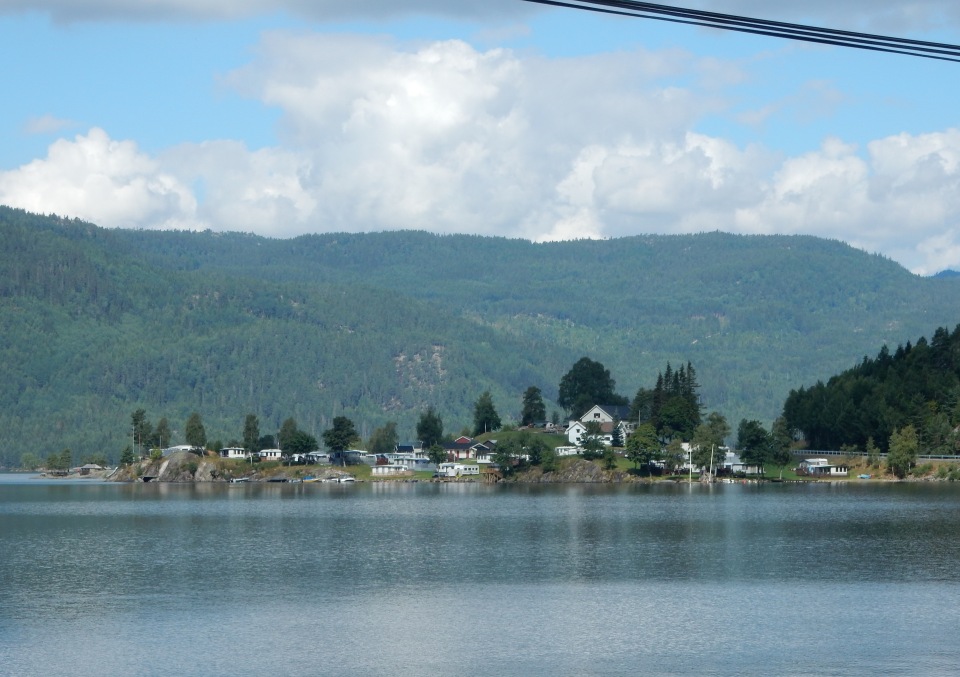 ← In the Land of DELTA
Neset Camping in BYGLANDSFIORD, NORWAY #2 →