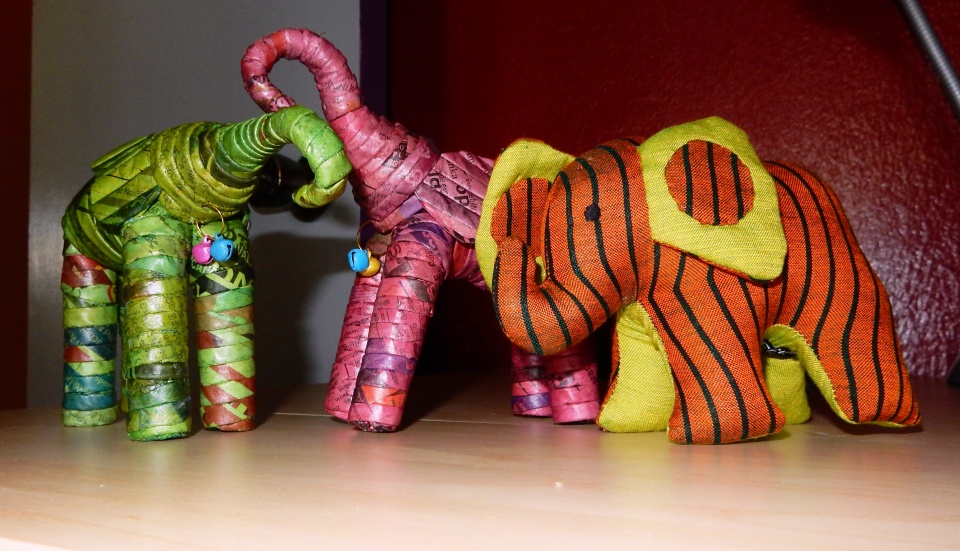 Last safari of the trip. Elephants from the Barefoot Art Gallery & Shop in Colombo.

The way home was hard. Thirty-one hours. Too long. It was the last hassle—with “US Airways 3583 operated by SKYWEST AIRLINES AS AMERICAN EAGLE” where instead of checking in at US Airways in Terminal 3 you must actually walk back to Terminal 4 and check in at American Airlines—that was the final icing on the cake of exhaustion. And of course every single person you must interact with is borderline rude because they’ve had a long day too and their lives suck and they hate their jobs…whatever. First airline problems of the whole Big Trip. Well, except for when I booked us into the wrong Johannesburg airport but that’s another story.

But hey, here I am…on my couch…getting ready to watch the last three episodes of “Orange is the New Black” (which I am now so over) and eat a baked potato that for some reason seems like the most delicious meal I can imagine.

I came down with a sore throat literally at the first airport on the way home, finally getting to use some of the emergency meds I had carted around with me for the whole trip. Had to kill any inkling of illness in the bud because if you indicate you are not feeling well and that you’ve been to Africa people will run screaming from you in terror. When, as Scott just pointed out, we are closer to the Ebola-infected areas here in New Mexico (Dallas, Texas hospital!) than we ever were in our African travels. But as far as most Americans are concerned Africa is one country, all alike, and all scary. Our lack of geographic knowledge would just be pitiful if it didn’t have the potential to get us in so much trouble.

I am very happy to be home.

This trip was the “coming of age” experience as I projected which will be the topic of a future post.

It was a privilege to spend five whole weeks with my terrifically interesting and sweet grandson, more about him later as well.

AND, I am happy to say my travel obsession is not at all over but it is in the process of being beaten into submission…from which it will emerge in a slightly more realistic form than ‘every country in the world.’

Category: AROUND THE WORLD      Tags: Barefoot Shopping in Colombo, US Airways

4 Comments on “The Party’s Over”