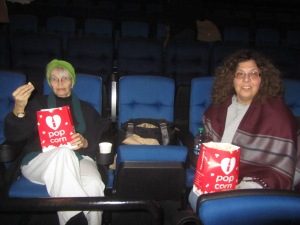 MOVIES MOVIES MOVIES…BUT FIRST MY WEEKLY NEW MEDIA UPDATE: Last time I wrote about the old media of books and movies while nevertheless declaring my fascination for and appreciation of the NEW. Then this week my best new media friends betrayed me. Droid, it turns out was downloading email during my entire two-week holiday out of the country. I did not ask him to do that and, in fact, thought he had been temporarily suspended but no…I had not hit OFF in enough places and that data was just eating up $300 of February’s budget. Never mind. Droid has now been banished to a drawer while I chastise my careless self by reverting to my old dumb phone for some months of money-saving atonement.

NOW, ON TO THE MOVIES: First up since I already reported on Argo and Lincoln last Sunday is Silver Linings Playbook (troubled young man and woman meet, fall in love and live happily ever after, maybe) on Wednesday night. What a perfect film. But I wasn’t in love with it (unless just a fleeting fantasy about youth and Bradley Cooper counts?). Everything was just right: people said fuck a lot which is de rigueur for all hip flicks; mental illness was front and center and the exchange about actual commonly prescribed meds—half the movie audience was probably on—Abilify, Xanex, Effexor, etc. made it contemporary and sophisticated; there was a lot of fighting and yelling so we would know it was like every real family, and the urban landscape and local color were great—good old Philly, home of Bradley Cooper and cheesesteaks and such like. Just the youngish love thing was a bit tiresome but certainly not for people who are youngish and in love or want to be. So my jaded self rates “Silver Linings Playbook” somewhere just above good—and the ‘just above’ is because Robert De Niro is quite simply perfect.

Moving on to Beasts of the Southern Wild. (plucky young girl survives awful things, man-made and environmental, and lives happily ever after, I’m pretty sure) Watched it at home Thursday night (after rejoining Netflix so I would never get this far behind in movies again) with two glasses of wine and an egg sandwich. Somehow it’s just not the same without popcorn and the big big screen and other people breathing, giggling or whispering here and there. Beasts is a tale of survival, otherness, independence and a crazy kind of bravery all just outside of our favorite city—New Orleans. I say favorite because Americans have adopted NOLA for its joie de vivre; rowdiness; corruption; unique African, African American, French, Deep South, Redneck culture and its TRAGIC weather history. Beasts of the Southern Wild offers up a place fondly referred to by its ragtag collection of residents as the “bathtub,” bayous, oil refinery-cluttered skylines, a symbolic porcupine boat, ramshackle habitations and a BIG storm. The oddball little collection of blacks and whites (in NOLA they all get along) survive for the most part and fight back by blowing up a levy so their dying bit of swamp can live again.

The question is…without Quvenzhané Wallis would this movie have been nominated for an Academy Award? Probably not. Hush Puppy and her ne’er-do-well daddy, a powerful angry confused drunken black man who does love his kid and the bathtub, ARE the film. The mystique of New Orleans, our national Hurricane Katrina psychosis, and one little magnificent compelling mesmerizing black girl have infused an ordinary tale with meaning and power. Beasts is ahead of Silver Linings but not in the top three yet.

Finally yesterday—scarily, violently, brilliantly (I say with some reluctance) there’s Django Unchained. (a cowboy and his sidekick kill a bunch of bad guys to save the beautiful girl and the lovers ride away into the sunset to live happily ever after, yeah, right!)
In Northome, Minnesota in the ‘50s the Royal Theater showed two movies a week, each them twice an evening for three days (as I remember it). My cousin Audrey was the cashier and when I stayed in town I could go to work with her as often as I wanted. And I loved movies, loved them, loved them. Along with books they were pretty much my only interests in life. Especially westerns and all those galloping horses with their glistening coats of many colors and mountains and wide open spaces. If memory serves me I sat through the entire six showings of many of my beloved cowboy movies.  So really—to me—Django Unchained is just Roy Rogers with violence times 1000!

I’ve only seen Reservoir Dogs before this present extravaganza of blood guts destruction death. Wow. The blood is so bright and spouting and spurting and, well, colorful and see how the bodies dive and dance. The bullets fly, creating artful patterns in all manner of materials. Okay, now I see why magazines with hundreds of bullets are so important—can’t kill as fast as Tarantino needs you to without lots and lots of rapid fire.

At heart though this is just an updated western with the same beautiful daring cowboys of old. This time the star is black, that’s different, but he’s no more or less valiant and handsome and strong than Gene and Roy. And his love, a pure (but vulnerable) beauty is a modern match for the most sought after and equally vulnerable blonde in old Dodge City. The landscape is still grand, the horses still fast and sleek. And there’s a little perk that was almost never there with those cowboys of yore. The many grungy illiterate mean bad guys turn out to be funny, especially in the Klan scene, but there are bits of nasty humor all over the place like the banter between the German bounty hunter good guy and Django in their ever-changing sidekick roles, and the simpering sister and that odd kissy-face relationship with her brother at Candyland.

Django Unchained is spectacular in its own Tarantinoesque way. It is not thoughtful or meaningful or unique or enlightening but it is a fine fine adventure story. It might be tied in my number two spot with Lincoln. Even though I hate that I think this gun-mad event is so good. Okay, four to go.