First day.  And they danced. And a cold wind blew in from the North? South? 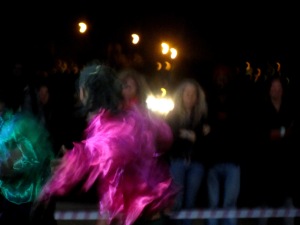 There were speeches—many. Food—much. Friends—quite a few. A magnificent new art center in Soweto to celebrate. And the first four festival dances. A fine way to begin.

Opening ceremonies began early evening at the new performing art center in Soweto. A very grand affair of curves and colors, putting yet another claim on Soweto’s status as a city to be reckoned with. Developed as a township for blacks evicted from Johannesburg proper and site of the Soweto uprising which in turn was one of the primary events leading ultimately to the end of apartheid. Soweto was all black and all poor but never without people power, determination and the kind of intense energy one feels in only a few places in the world such as NYC. Photos of the spectacular new Soweto Theater can be found at mambaonline.com.

It is not possible to write at length about all of the performances offered at Danse l’Afrique danse so one (or occasionally two) at a time must suffice. Besides since I am not a dance critic these observations are simply my own thoughts and images and not intended to be learned or important to anyone but me. 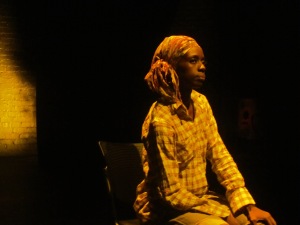 I want to use words like riveting or spellbinding but maybe they are too strong—although my attention was riveted on Fatou throughout the dance. Fatou is a lean limber presence, her skin stretched tightly over that elegant frame. I purposely did not read the description before watching the performance so I could think my own thoughts. 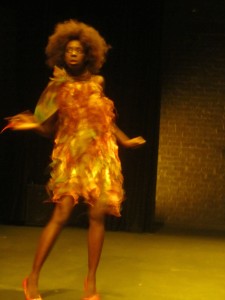 The piece “Regarde-Moi Encore” or Look at me again!  is the voice of an angry woman, first very still, she is thinking/twitching/growing impatient or as the brochure tells us “She is indeed looking for her space. She wants it. She takes it. With her body, which is animated, and her gestures, anchored to a crazy day-to-day reality, she escapes the tedious days through her facetious audacity.” It is an apt description, She is so forceful one moment and all little-girly the next. 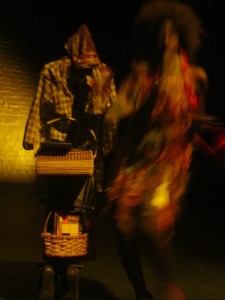 Fatou has made a piece you must pay attention to…how to describe…forceful but made up of layers of subtle gestures and movements. Very nice and not easily forgettable—which is important in a festival of so many works. 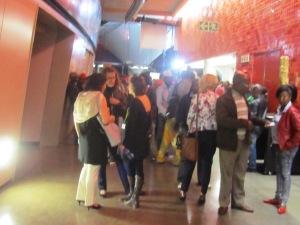 A good start. As we left the theatre, many speeches and two performances later, the weather had turned ugly…cold and windy, all to disprove the claim I make to everyone that the weather in Jo’burg is always perfect spring or fall.

Home to my cozy little room (with a bathroom of grand palace size oddly enough) at Thulani Lodge where fortunately there is a little heater next to my bed… More to come.

One Comment on “A Journey to Johannesburg and Addis Ababa/ Chapter II: Danse l’Afrique danse”