GEOGRAPHY: Leaving Viking Country for the Great Plains and, finally, the Mountain West 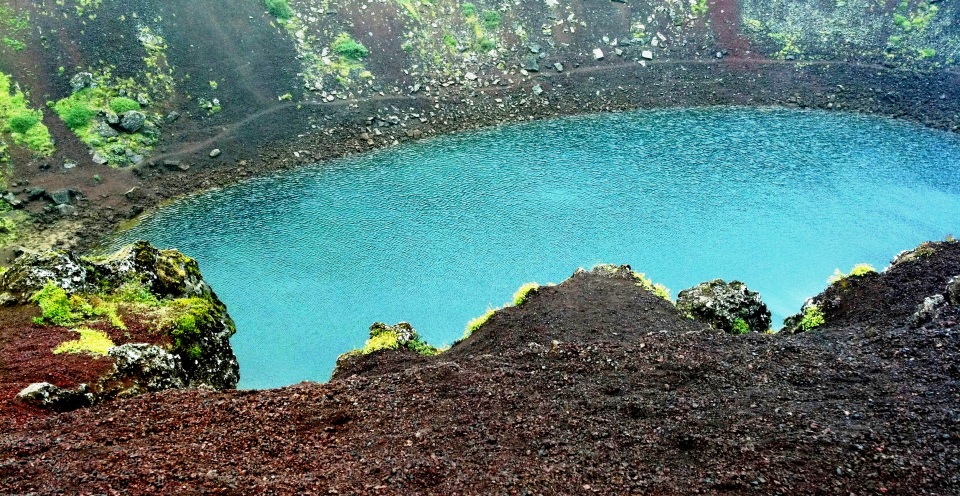 Sunday, August 12/6:30am: Time to leave Viking Country East—or as we fondly refer to it locally—Minneapolis, Minnesota. My car has been parked here at the Mall of America/Airport Super 8 motel awaiting my return from real Viking country and our journey back over the Great Plains—on different byways this time. 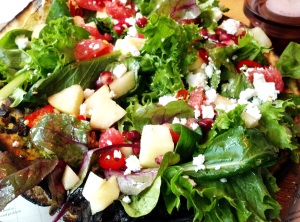 Two days ago Teresa and I were still on the trail of our Viking ancestors—our last day in Iceland about to begin. We began with a rather fancy green and leafy Icelandic pizza at a new and very hip waterfront hotel. Tried to find a place where we could gnaw on leg of beast and let the grease run down our chins but all of these bloodthirsty seafarers have turned to fresh veggies and linen napkins.

But our sissy lunch was quickly followed with a blustery outdoor adventure at hot springs, geysers, waterfalls and the rift valley (where North America meets Eurasia). We clamber up and down rocks and hillsides and around hot water puddles, getting soaking wet and cold in what feels like gale force winds.

The background for these dramatic displays is pretty spectacular all on its own. Emerald grass on black and deep red lava, all sharp and shiny in the rain. Round white plastic-wrapped hay bales dot the landscape and the shaggy Icelandic horses (do not call them ponies we are told!) stand with their butts to the biting wind.

Rivers of heat, air of mist

It is all grand here. No wimpy scenery in this country.

In spite of our attempt to stay focused on the natural wonders of the northern world thoughts of cozy room, sweat pants and Nutella for dinner cross our minds. Teresa’s actually trying the dried fish with butter that Icelanders eat with such pleasure. It is our last night and she is torn between her desire to go out and watch the wild partying that consumes Icelandic weekends or huddle down in her blankets with a movie. The latter wins.

But every adventure must be followed by the long ride home. Saturday was our Delta day. Bob stops over in NYC, Teresa flies on to Los Angeles and I go back to Minneapolis. 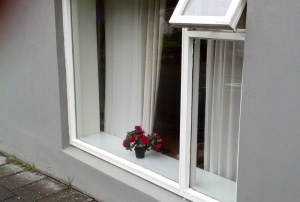 We are sad to leave our Icelandic hut in the wilds of Reykjavik.

One last breath of unpolluted air before Los Angeles.

8am: I am happy in this Sunday morning rain driving along on U.S. Highway 212 which begins here and which I will take almost all of the way to Rapid City, South Dakota. Cows and fields and groves and grain and corn and a dark red barn.

9am: Countryside is opening up. I will consider this the transition place from the Viking country of  Minnesota with many trees to the Great Plains…I don’t feel quite ready to leave Minnesota…but I must go. Bird Island, Olivia “The Corn Capital,” 59°, Sheep Shedde Motel. We had a sheep shed on our place when I was a kid. Later it became the chicken house and now it has fallen down.

The Olympics are ending, U.S. won a lot of medals which proves we’re better than the Chinese at something?  Romney picked Paul Ryan as his running mate which proves the desire to eliminate every vestige of all social gains of the last century is alive and well in certain quarters of this country. Driving and thinking is a fine sport—Olympics-worthy.

10am. 212 detour, no towns. I’m lost. Will never find McDonald’s hash browns for breakfast. Not so bad to be lost in a green drizzly farmscape—I’ll just eat my yogurt from the breakfast bar at Super 8.

It is the time of year in northern places when the trees are discussing fall colors. Not actually changing yet but a hint of gold is in the air.

Further and further from Viking land and into the Great Plains—which I was quite romantic about on the way here…but now I am thinking one drive through the vast beautiful emptiness is enough for this year.

Wonder where I am. Good paved and gravel roads, prosperous farms, ponds, bogs, creeks but no one out and about. No signs, no traffic, no noise, no humans. Just me and the corn and the song birds.

I have crossed into South Dakota but don’t know when. And a nice lady stopped by my car as I sat pondering my atlas and gave me directions back to 212.

3pm: I have crossed the wide Missouri for the second time…further north in South Dakota…just before I travel over into the Cheyenne River Reservation.

Amidst all of this wide open grandeur are many sad little towns both on and off Indian land. Dilapidated and/or deserted. Among the picturesque acres of sunflowers, herds of semi-wild horses and steady stream of bikers—for we are in biking land. The only traffic on much of 212 and the other roads this side of Rapid City and Sturgis are bikes. Big bad boy bikes, not the pretty lightweights of urban cyclists. No neon spandex cycling shorts on these highways.

4:50: I stop at a little crossroads store to ask directions—remember I am only driving back roads—very back roads, not so far from Rapid City but in the true middle of nowhere. A handsome weather-beaten oldish guy tells me which way to go. His store is well-stocked with the staples of life including decent booze and it looks like he has a great apartment out back. I want to live with him…in the middle-of-nowhere and write books and help out in the store and travel half the year and be all cozy here in winter blizzards rescuing lost travelers who have strayed down the wrong road today or in life.

But alas, there’s no flyer advertising an opening for just such a position. So back on the road again……….

5pm; Almost to Rapid City for my night’s stop. Temperature has climbed from mid 50s in am to mid-70s, cloudy or overcast most of day. Perfect driving weather. Just me and my Mazda. La Quinta in Rapid City.

6:30am: Just out of Hot Springs I pass the Black Hills Wild Horse Sanctuary. A place to which I will return. The Black Hills is a dream land with powerful iconic sculpture and Indian history galore and the most graceful sleek pintos and bays and palominos any little girl (the one still buried deep within me) could wish for.

7am: Less than an hour to Hot Springs. But I’ll go on to Ardmore SD for gas since I’m already on Highway 71.

7:30am: BAD decision. Gas light comes on and it turns out Ardmore died some years ago from lack of water…Towns are 50 or 70 miles apart here. But Fire Station appears maintained and open and lo and behold the men-of-the-plains cowboy firemen are here for my rescue. Couple gallons of gas and lots of dead town photos and I’m on my way again.

8:15am: I GET GAS and peanut butter cups for breakfast.

All day: I am driving straight down Nebraska and Colorado Highways 71. For space to be grand there must be a little up and down to it, a glimpse of something in the distance. This country is just flat and brown and sky. Still I rather like. Two lane road is straight and empty and I can drive fast.

In a small town store an 81-year-old guy working 12 hour shifts at the wind farm (I know because he tells someone else) turns to me to exchange a pleasantry, I congratulate him and say I want to work that long. He responds with “Well if somebody’d shoot that SOB in the white house the economy would get better and everybody wouldn’t have to do this.” “George Bush did that to the economy,” I say. “But this sonovabitch made it worse…somebody oughta take a gun and shoot him,” he repeats. “Boy, that’s a responsible attitude” I say…and walk out. Fuming for miles and miles over what I should have said about guns and the he-men who love them. Does spike my adrenaline and keep me alert for the next 100 miles or so of driving.

5pm: I cross Raton Pass in a downpour—the likes of which I have not seen since I lived in tropical jungles. My only concession to freeways is I-25 on into Albuquerque when I am very tired. Ice cream sandwich in Las Vegas. Albuquerque. Home.

Across the wide wide Missouri.

Broken but still a thing of western beauty. 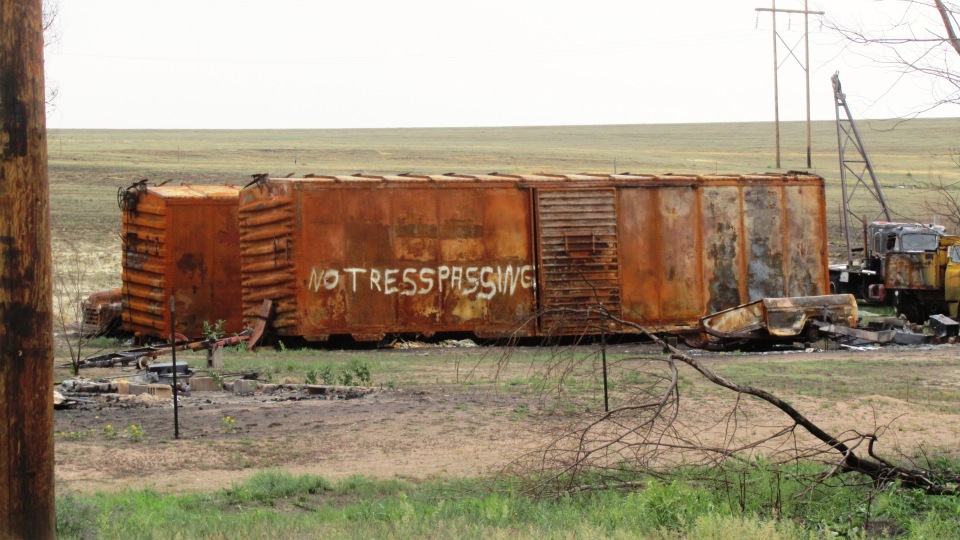 End of the trail.

← ICELAND…Go Vikings!
A SHORT HISTORY OF DANCE IN MY LIFE →

One Comment on “GEOGRAPHY: Leaving Viking Country for the Great Plains and, finally, the Mountain West”