Safari is NOT like living next to the zoo after all

LIONS. Big tawny strongly-muscled beasts whose babies make delightful characters in children’s books, whose pelts were sought by Teddy Roosevelt, whose deaths by spear were important to young Masai seeking their manhood…and who are usually asleep when you visit the zoo. Therefore you must visit them at home!

The great ocher female lion pulls the gutted wildebeest several paces, stops and pants because the big unwieldy carcass weighs as much as her. She crunches her deadly teeth back into the carcass and pulls on for the next few yards, repeating over and over. Meanwhile, under the solitary green and bushy tree toward which she appears to be heading, three cheetahs lie in spotted camouflage, their long slick bodies stretching comfortably, although one has raised her head, peering lazily at the approaching intruder. Lady lion pauses, pulls, pauses, pulls, a few yards at a time and, yes, her trajectory is definitely toward that one spot of shade.   The cheetahs all raise their heads, ears pricked, one sits, two just lie there. Then they all sit up. And stare.

Lunch will definitely be hearty and flavorful.

The lion pays no mind. Drag, stop, drag, stop…this is one heavy wildebeest.  Now all three cheetahs are on their feet and one moves a short ways out of the shade. As the queen of the plain draws ever nearer, the cheetahs treasured bit of shade is abandoned. The move is not made hurriedly nor do they seem particularly upset by this unfortunate (if you’re the cheetah) turn of events, but the ranking in the feline power structure out here on the Masai Mara is clear. 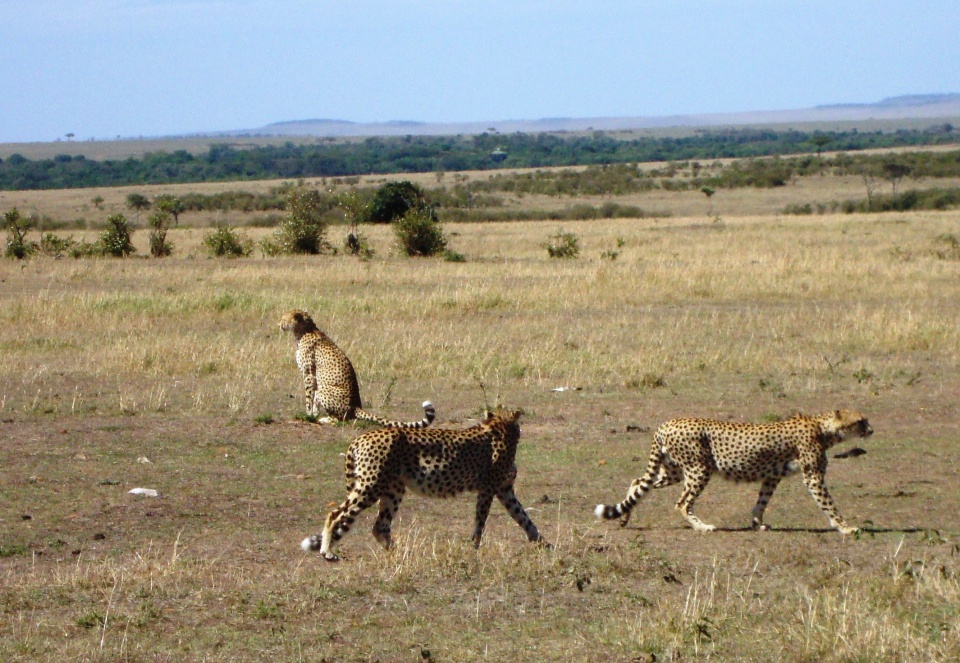 After her long haul, the queen of the cats lays down in the shade, her bounty just at her front paws, and rests, assured that lunch will be plentiful. The cheetahs move toward more distant trees, frequently glancing back in what appears to be profound annoyance but with neither great fear nor cowardice—it is just the way it is out here on this African hillside. 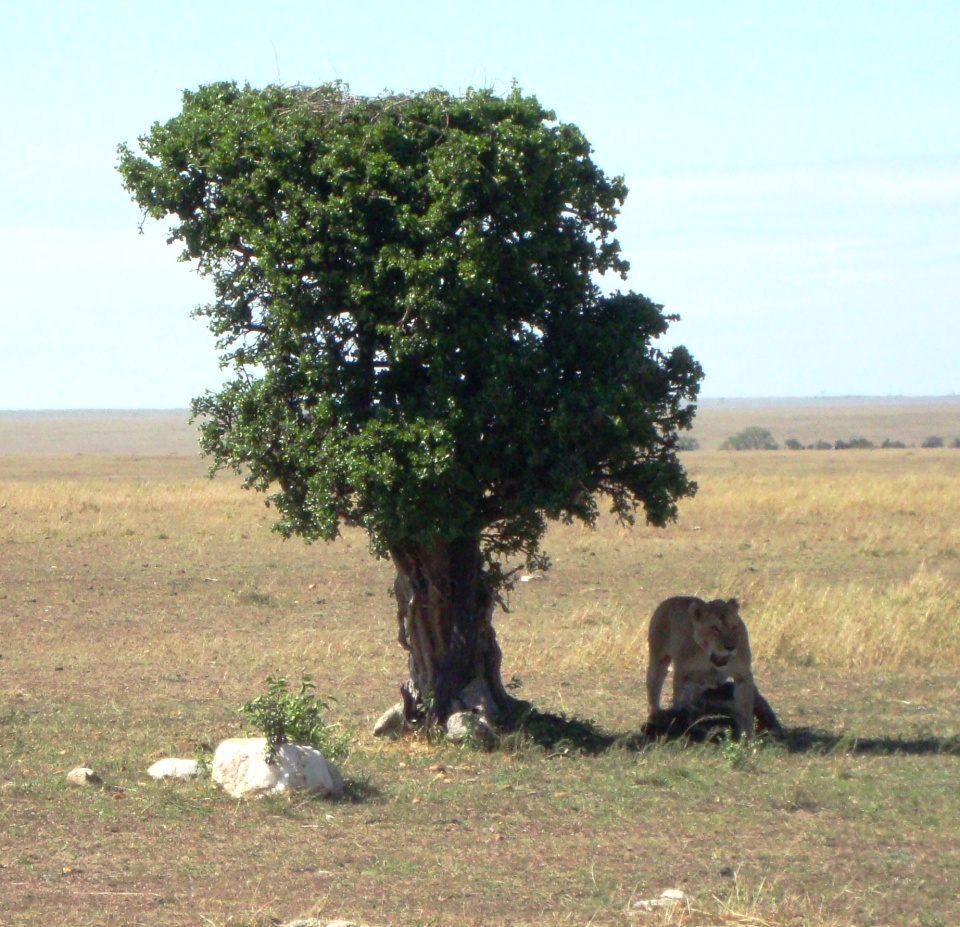 Can’t find that scenario at the zoo!

What was surely a dramatic kill preceding that tree-based power play and an earlier mating ritual attest to why Nature and Animal Planet, etc. shows about big cats are oft-repeated and much loved. Lions are glorious beasts but the bright kingly orange of the big ruffed male and slightly smaller and less flashy tone of his mate misrepresent the importance of the roles they play. It is the female who actually does most of the hunting while the big beautiful boys laze about. And now we watch while the king stalks and advances and the queen gives in for a moment and then slaps him away. Just like TV. Cameras click.

For many years, I have consistently listed four things of no interest to me: Marriage, home ownership, cruises and safaris. After three very special days in Masai Mara National Reserve (Kenya’s extension of the Serengeti Plains), I must take the latter back. I am just hoping that I won’t wake up at 90 in the nursing home wanting a husband and a house and begging my children to take me on a raucous singles cruise down the Mexican coast.

From a meeting in Nairobi, two colleagues and I set out for Masai Mara, driven in a big safari jeep by a remarkably-knowledgeable guide named Joseph, The road winds through the lush rolling hills that so attracted those famous and infamous British settlers onto the scene. Some things never change it seems; Prince William just proposed to his girl Kate on the slopes of Mount Kenya. Laura, who planned this trip, made a wise and socially conscious decision to book at Basecamp Masai Mara, an ecologically-friendly safari base of the first order. It is owned by a Scandinavian, managed by some very wise and socially-aware Kenyans and a delight to both senses and ethics to visit. It is profusely described and praised on-line so no need for further description. 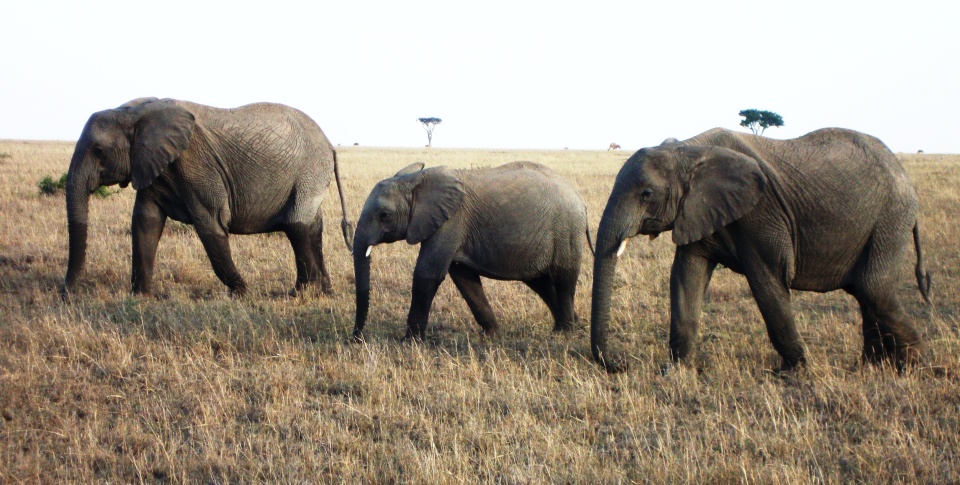 An evening walk with the family.

The King…Long live the King.

We jeeped through the plains and hills and along the rivers twice a day for hours at a time—watching the big cats and prehistoric hippos and curious giraffes, the secretary bird whose office-appropriate ‘outfit’ and lipstick, our guide found worthy of many chuckles, and the assortment of antelopes in all of their graceful golden brown, black and white intricately horned beauty. Everyone has their favorites though…mine the herds of wildebeest and zebras frequently co-mingled—the goofy bearded nursery rhyme-characteristics of the wildebeest nicely complimenting the most-beloved and unbelievable member of the horse family, the fancily and fancifully-stripped zebra. You have the feeling zebras cannot be real, that if you walk up and rub them the stripes will come right off. And finally, wart hogs and hyenas, the underappreciated denizens of these plains. Not a lot of beauty about which to rhapsodize but they do much to lend that fantastical quality to Africa’s animal kingdom.

Two references from Art History 101 and all those years of Sunday school (finally I found a use for them) come to me as we bump about the trails or pause for long silent observation. First Edward Hicks painting “Peaceable Kingdom” with the ox and the lion and the goat and the leopard sitting ‘peaceably’ together and then the biblical: The wolf also shall dwell with the lamb, and the leopard shall lie down with the kid; and the calf and the young lion and the fatling together; and a little child shall lead them. (Isaiah 11:6/King James Version). Maybe it’s not quite like that, surely the about-to-be-savored wildebeest probably didn’t feel like the kill was a peaceable moment and the ‘lying down’ part was about being eaten—still my sense of awe in seeing all of those near-mythical beasts living a balanced and semi-friendly co-existence was palpable.

They do the great trek across Masai Mara and the Serengeti together.

Since it would be impossible to make a description of any one animal or sight that was fresh and original, here are a few of my personal musings as I awoke to a myriad of bird and monkey voices in the morning or sipped wine in the tree-thatched dining room as sun set…. 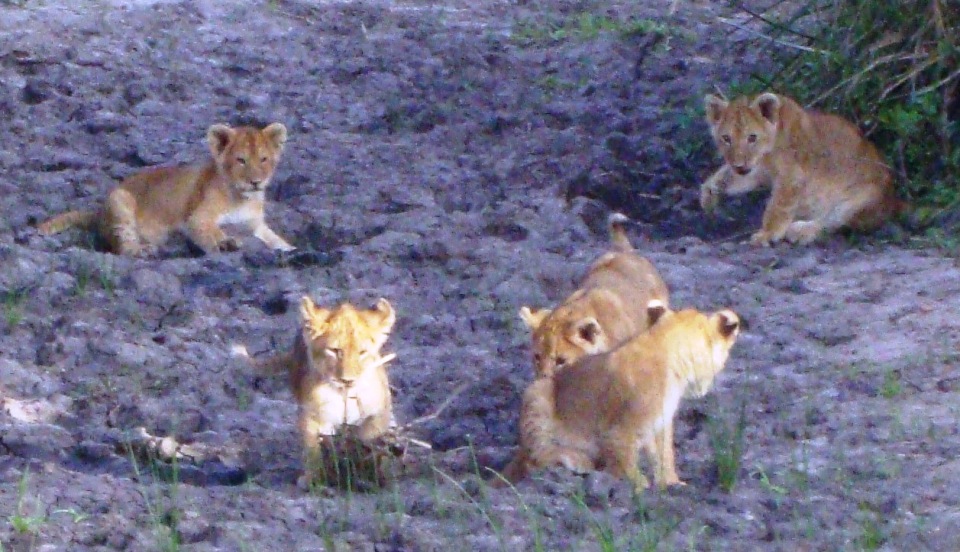 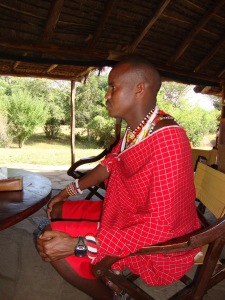 Go on safari. Shoot with your Sony Cyber-shot. Marvel at how you’re in the container and they are not. Spend sunset with a group of young Masai who serenade, do the Masai leap and tell a few tales around the campfire—since cattle-herding and a blood and milk diet is a fading lifestyle. But don’t romanticize the loss of these distinct cultures around the world without remembering traditional cultures were almost NEVER good for women. Do romanticize wild animals in their natural habitats while there are some left. 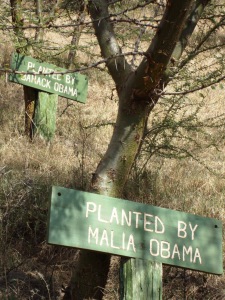 Democrats plant trees and are interested in the world…usually.