TRAVEL IS NOT ALWAYS PRETTY. IT’S BETTER THAN THAT. 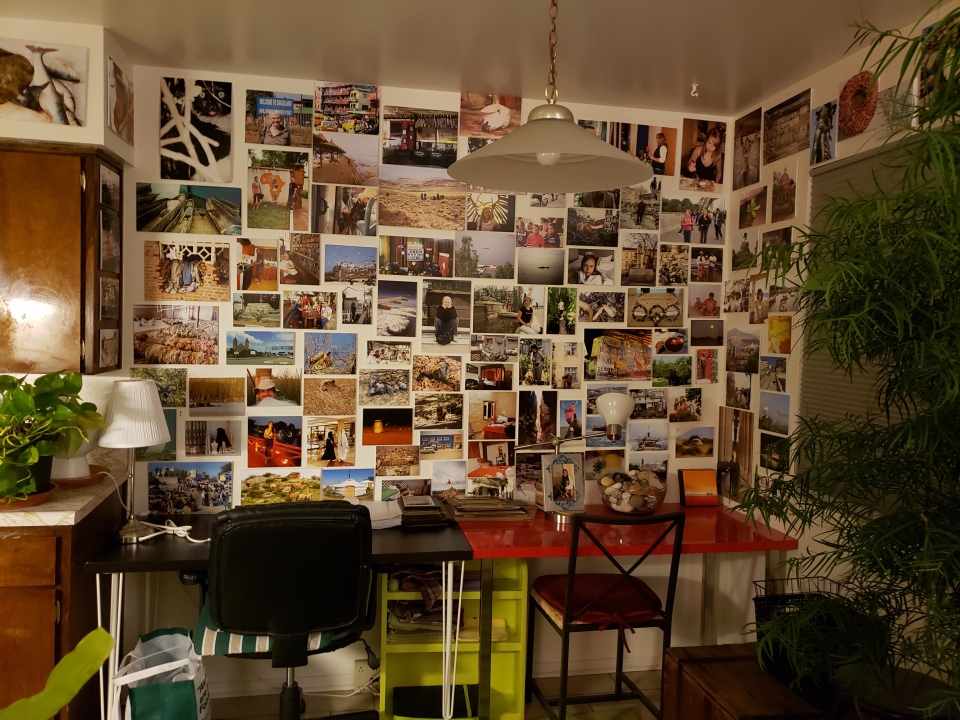 My goal is to have one (or more) of these nicely printed and mounted photos of every country I’ve visited on my walls. Could make a less obsessive traveler a bit claustrophobic I suppose!

“Travel isn’t always pretty. It isn’t always comfortable. Sometimes it hurts, it even breaks your heart. But that’s okay. The journey changes you; it should change you. It leaves marks on your memory, on your consciousness, on your heart, and on your body. You take something with you. Hopefully, you leave something good behind.” (Anthony Bourdain)

Let me not think or write about the dreadful state of the nation and the world for a little while. Let me just write about my travel plans for this fine (please let it be fine) year of 2020. They are brilliant. The quick view: San Diego/Visalia/San Francisco, CA; New York City; Havana, Cuba; Cape Town/Jo’burg, South Africa; Lilongwe, Malawi; Masai Mara/Nairobi, Kenya; Entebbe/Kampala, Uganda; New England (by train from Albuquerque!). My outlook brightened even as I wrote those names.

Good week. I’ve purchased one of my California plane tickets (nice son picked up most of them!); I’ve booked our (Teresa, my obsessively travel-oriented granddaughter and me) Airbnb in Havana, and looked more closely at the ‘garden tour’ (adventures up along the coast from Cape Town) and diamond mine visits near Johannesburg. Oh yeah, have also been cleaning and rearranging my office and watching the Nevada debate with Bloomberg’s first appearance. So far nothing has managed to spoil my good mood—although Bloomberg came damn close with his dreadful performance.

My mood is radically different than last year at this time, waiting for what felt like birthday that would end life as I currently know it. Now I’m simply happy to be at the low end of a high decade…how’s that for renewed optimism?

Incredibly Important Travel Thoughts (a new category of travel writing I’ve just invented): I’m booking an Airbnb in Havana because we’ll be there for five nights. My general policy is to consider Airbnbs if a stay is longer than three days. It’s not worth finding the place and new check-in procedures every time for shorter stays. And there’s the leftover food problem…I mean does anyone have the secret of not excitedly investigating a ‘foreign’ grocery story without buying too much? That’s a rhetorical question…I am positive there is not a human so disciplined. Then you’re left with the agony of trying to decide what’s appropriate to leave for the next occupant and what should just be tossed. So complicated. In a hotel you only have that half-eaten bag of chips to toss or stow away for your airline meal.

About all of those amazing places on this year’s itinerary—and a focal point in each: San Diego (how many years can I hike up the incredible heights (joke, darn it) of Black Mountain and swill vodka afterward?); Visalia (Steven and Ashley’s new home—the coastal kids on their first inland experience); San Francisco (Lace in her and Jon’s new actual/real life/in the heart of San Francisco apartment—prices have gone up a bit since my $300 studio in the Mission). AND Havana, Cuba (Because Lace will be 30 this year and we needed to have one of our trips to celebrate—so, we said, what’s close by (relatively speaking) and off-the-beaten path and of great interest to both of us for many and sundry reasons—that would be Cuba of course) All in April.

Next: New York City (friend Bob and I do Broadway/four or five shows, MOMA and Central Park and even more— Stadtluft Macht Frei, “city air makes you free,” was once a statement of Germanic law: a serf who lived in a city for a year and a day was freed from his obligations to his manorial master. I’ve always been a city girl at heart (could that come from being born and raised in the deep backwoods of the north?) and have lived in a few good ones: Portland OR, Mpls/St. Paul, Orlando, San Francisco, San Diego and…well… Albuquerque is sort of a city. But NYC is the mother-of-all-cityhood in my experience and I haven’t been for awhile…so this is exciting. End of April/Early May. 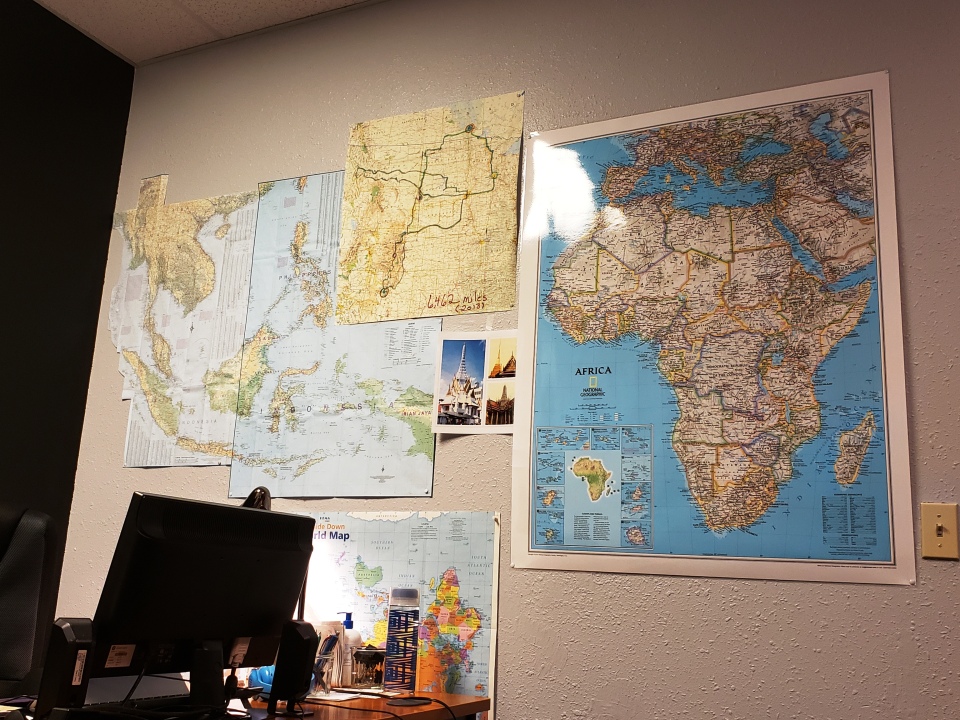 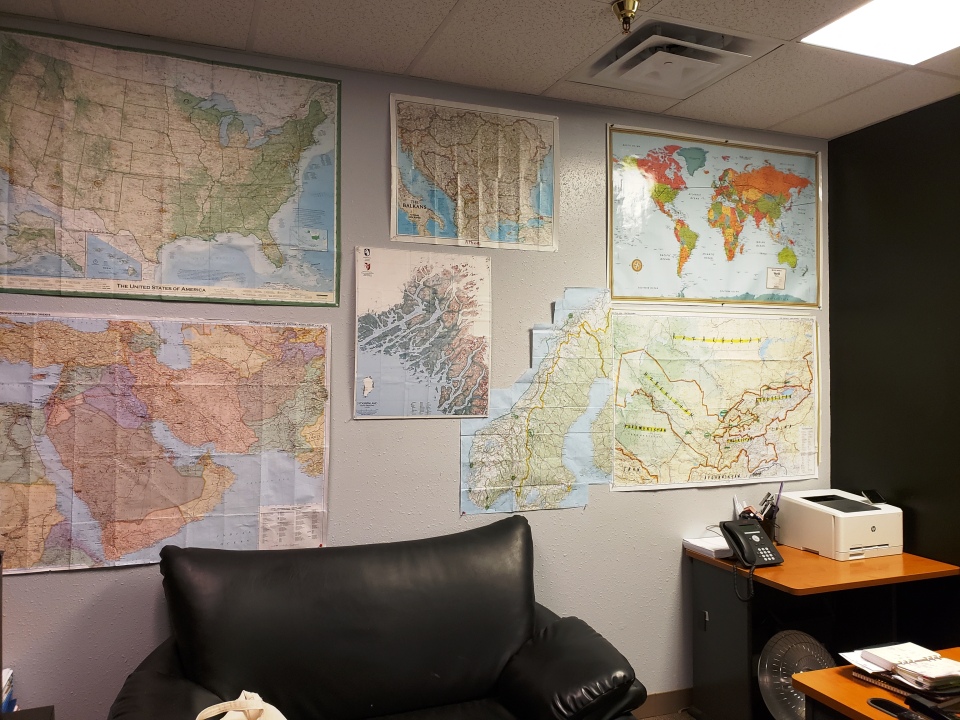 With its two map walls! 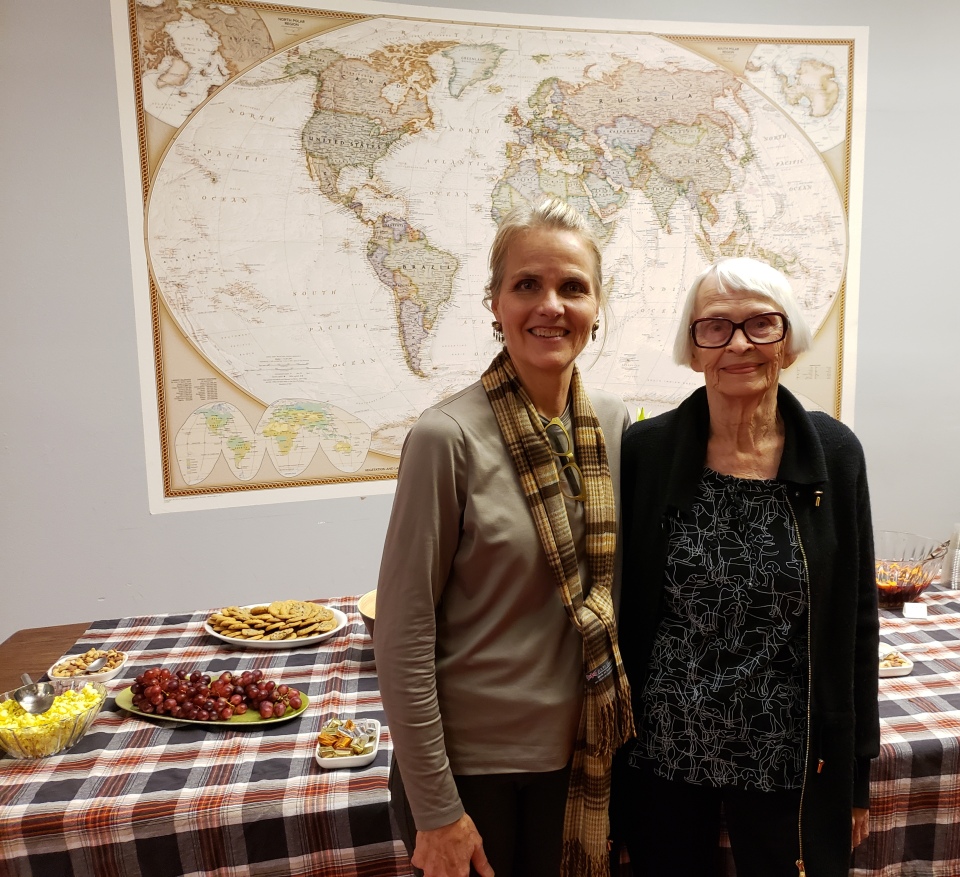 Susanna and I in front of a wall of our lobby gallery. Visitors actually spend a good amount of time and attention on our giant map.

Enough. The outlines of the African and New England travel deserve their own posts for a variety of reasons. Something for the future…

I’ve made myself happy enough now with travel talk so the prospect of more rich (although I think Bernie’s barely a millionaire) old white guys running my country won’t make me throw myself in front of a truck for the time being.

← 2020: THE WEATHER REPORT
COFFEE AND CIGARETTES →

One Comment on “TRAVEL IS NOT ALWAYS PRETTY. IT’S BETTER THAN THAT.”